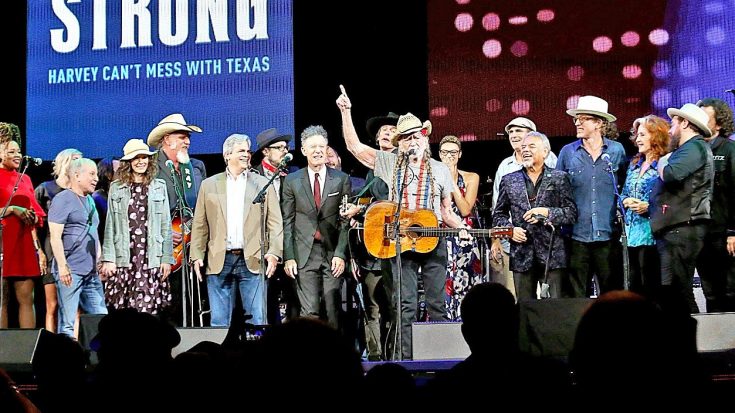 Native Texan Willie Nelson has done his fair share to help with the relief efforts as well. On Friday (September 22), Nelson and a whole host of music legends took part in a Harvey benefit concert in Austin, Texas, with the hopes of raising more money for the Rebuild Texas Fund.

According to news station KHOU 11 out of Houston, the Rebuild Texas Fund has raised a total of $68 million so far. It is still unknown how much money Nelson and the other performers were able to generate as a result of their benefit concert. But as KHOU 11 reports, “phones were ringing off the hook” for the duration of the show.

The concert featured a wealth of quality music, with some of the performers being Paul Simon, James Taylor, and Bonnie Raitt. Of course, Nelson was there as well, and he took charge in leading the entire ensemble in one of the most memorable performances of the night.

Standing front and center, Nelson led the cast of iconic artists in a gospel sing-along to “I’ll Fly Away.” The performance got everyone involved, as the crowd could be heard singing along with the artists.

But in the midst of all of the different voices, Nelson’s was the most prevalent. You won’t have to struggle to pick out his voice when you watch the sing-a-long in the video below.

Based on the quality of this one performance below, we’re sure the entire concert was packed full of top-notch entertainment!

You can donate to the Rebuild Texas Fund to help Harvey relief efforts by clicking this link here.