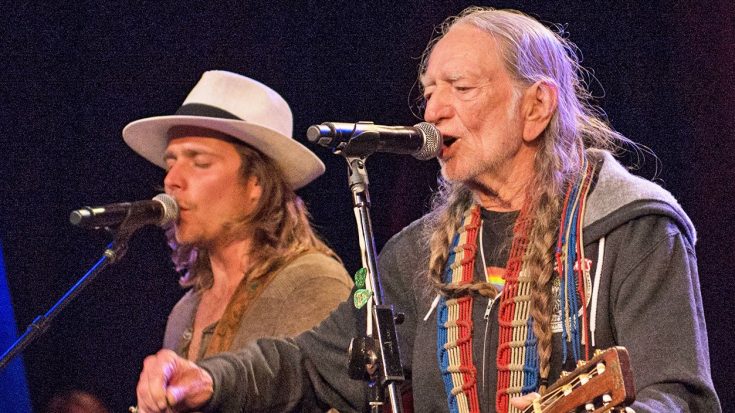 Country music outlaw Willie Nelson has been praised time and time again for his unbelievable impact on country music as well as the music industry as a whole. In addition to being a singer, songwriter, actor, and much more, Willie is also a father. His children have gone on their own journeys throughout their lives, but one of his sons has devoted his life to following in his father’s footsteps.

The son of Willie and his wife of 26 years, Annie D’Angelo, Lukas Nelson has been performing music for years. Despite growing up with a country singer as a father, Lukas decided to try his hand at rock music. Along with a few friends, Lukas formed the rock group Lukas Nelson & Promise of the Real, and took off in pursuit of his musical dreams.

As the band started to grow in fame and success, they caught the attention of a major name in the music industry…Neil Young. As a result, the group was invited to serve as the backing band on Neil’s album The Monsanto Years, and also joined him on its accompanying tour.

When Lukas isn’t busy with his band, he will often film himself singing one of his father’s classic hits. No matter what he sings, fans can always hear a hint of Willie’s voice in Lukas’. But whenever Lukas sings his father’s songs, the similarities between their two voices become all the more obvious.

Such was the case when Lukas sang “Always On My Mind,” which has been recorded by many artists in the past, including Elvis Presley. Willie’s version is perhaps the most notable, as it was a number one country hit and led him to win the Grammy Award for Best Male Country Vocal Performance.

With a small group of listeners and instrumentalists gathered around him, Lukas delivered a smooth performance of “Always On My Mind.” The way he sang made him sound nearly identical to his father! We swear, if you were to close your eyes and simply listen to him sing this, you’d assume it was Willie at first.

Go ahead and check out the clip of Lukas singing below so you know exactly what we mean. Can you hear the resemblance between his voice and Willie’s? He definitely inherited his talent, that’s for sure!