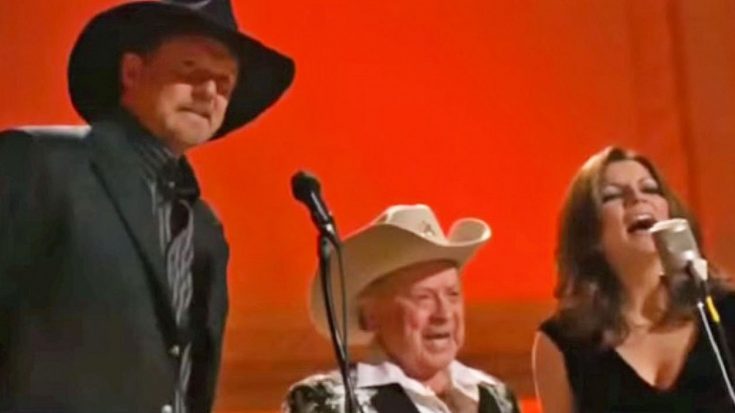 The Grand Ole Opry had a pretty big reason to celebrate back in 2006. That year marked its 80th anniversary, and as you would expect, there was a huge celebration.

In honor of the Opry, some of country music’s greatest stars gathered at Carnegie Hall in New York. Trace Adkins was one of the many icons who took the stage that day, with others being Vince Gill, Alan Jackson, Charley Pride, and Little Jimmy Dickens.

For a major finale performance, all of the stars came together to perform a medley of gospel songs near and dear to the hearts of country fans. They started off with “I’ll Fly Away,” which Jackson kicked off with a solo.

Then Adkins’ came in to take the reins on Hank Williams‘ “I Saw the Light.” The energy of the crowd and his fellow artists flowed through Adkins’ veins, as he delivered a passionate performance that sent the rest of the group flying into the next song.

Finally, the group concluded with the Christian hymn “Will the Circle Be Unbroken?” From start to finish, Adkins and the other country icons had the entire crowd on their feet and clapping along. That should show you just how good this mashup was!

Now you need to watch it in the clip below to fully understand what we mean. So go ahead and see for yourself, you’ll be glad you did!

During the gospel mashup, Adkins sang about seeing the light, and the same theme of light also applies to his latest single, “Lit.” But instead of being a gospel tune, “Lit” talks about all of the heavenly things on this Earth that make a person feel alive, such as a kiss from someone you love.

You don’t want to miss out on listening to “Lit,” so be sure to watch Adkins’ official lyric video for it below. We know you’ll love it, so be sure to download it here on iTunes once you’re finished!