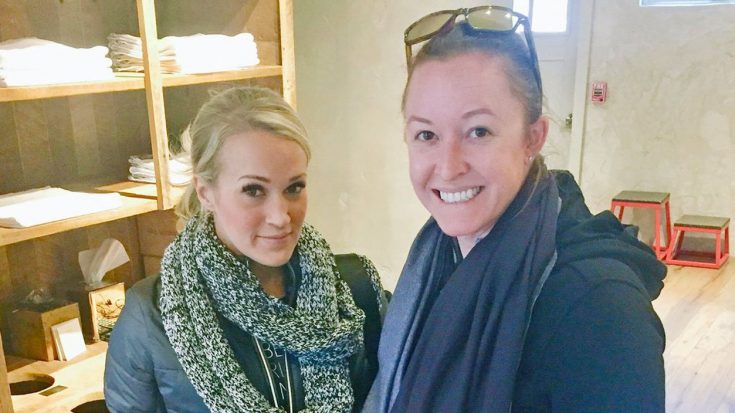 Over New Year’s weekend, country music superstar Carrie Underwood wrote a letter to her fans and shared details about her scary November fall. Just a couple days after co-hosting the CMA Awards for the tenth time with Brad Paisley, Underwood fell down outside of her Tennessee home and broke her wrist, which required immediate surgery.

She hasn’t posted a photo of herself since then and has stayed pretty quiet over the holidays, but in a year-end letter to her fan club, she opened up about her injury and described the fall as “life-changing.”

“It’s crazy how a freak random accident can change your life. In addition to breaking my wrist, I somehow managed to injure my face as well. I’ll spare you the gruesome details, but when I came out of surgery the night of my fall, the doctor told Mike that he had put between 40-50 stitches in…I want you all to understand why I might look a bit different,” Underwood wrote.

A little over a month after surgery, Underwood was spotted on social media for the first time in a photo with a fan. That fan happened to have quite a following because she used to star on the Bravo reality show Below Deck. Adrienne Gang wrote, “Just worked out next to @carrieunderwood NBD … she is adorable and so gracious… LOVE HER!” alongside a photo of the two of them after the workout.

Just worked out next to @carrieunderwood NBD… she is adorable and so gracious… LOVE HER! #BelowDeck pic.twitter.com/scDPGudEe3

This was weeks before anyone, even Gang, knew about her facial injuries. Responding to an article about Underwood requiring 40-50 stitches, Gang tweeted, “I had no clue she was injured,” and “She looked amazing!“

“I had no idea she got hurt prior to meeting her. She had a wrist brace on, but I didn’t think much of it until I saw the headlines after I posted our picture together,” Gang told Us Weekly. “She looked great and seemed to be in great spirits.”

Gang also told Us Weekly Underwood was working out on the treadmill with retired NHL star husband, Mike Fisher.

Even though the “Church Bells” singer warned fans that she might look different, it seems one of them didn’t even notice! We will continue to send her prayers during her recovery. In the meantime, check out her newly released video for “What I Never Knew I Always Wanted” with intimate family photos below.