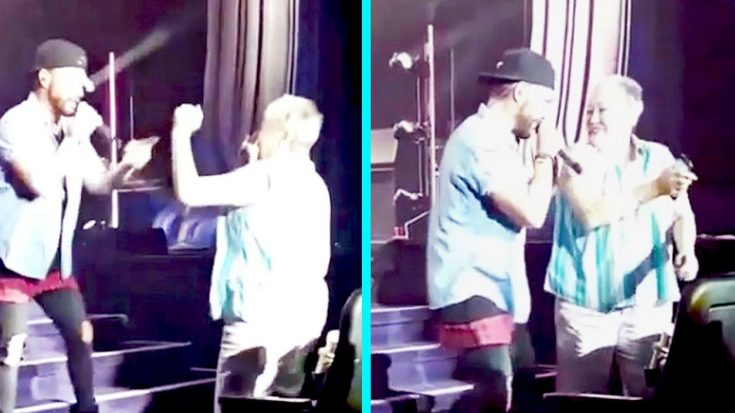 Believe it or not, country singer Chris Lane has only been a solo artist since 2014. But in that short amount of time he has already managed to chart three singles, one of which was a number one hit.

That song was “Fix,” which was released in 2015 as the lead single off of Lane’s debut solo album, Girl Problems. The song has sold nearly 300,000 copies to date, earning it Gold certification status from the RIAA.

As one of the hottest stars in country music right now, Lane has a busy tour schedule with dates booked in the U.S. and Canada. Plenty of fans turned out to his show over the weekend, including one energetic lady who was lucky enough to get a seat up front!

Proving that you don’t have to be young to love current country music, the woman was having the time of her life while Lane sang. Another concert attendee filmed her shamelessly busting a move in the middle of the concert, and Lane was directly in front of her!

Lane was loving the lady’s enthusiasm, and decided to jump down and join her for a second. The look on the woman’s face when she realized that Lane was right next to her was one of pure joy!

After the show, Lane shared a short clip of the woman dancing the night away during his concert. It seems like a memory he won’t forget any time soon, as he wrote that it was his favorite part of the show.

Tune in below to watch this dedicated country fan break it down in the middle of Lane’s performance. She takes the phrase “dance like no one’s watching” to a whole new level!