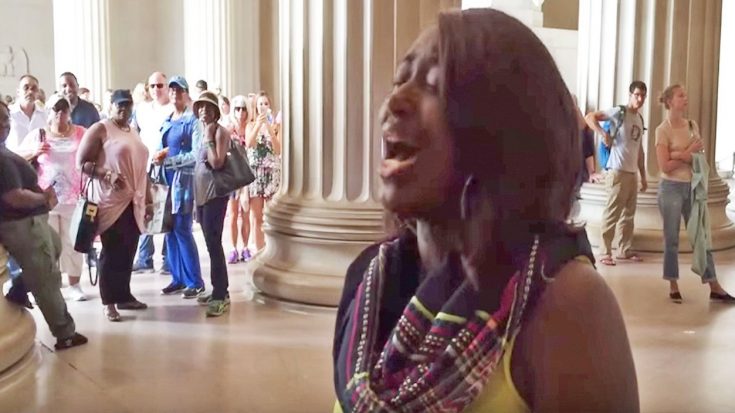 While on vacation in Washington, D.C., a Florida-based school administrator became an internet sensation following her impromptu performance of the National Anthem at the Lincoln Memorial. The talented assistant principle by the name of Star Swain was persuaded by a close friend to perform the song in the middle of the memorial.

“Who said that I am going to do that?” Swain asked her friend following his announcement that she would be singing the “Star-Spangled Banner.” Hesitant at first, the assistant principle began her passionate rendition of the beloved song. Swain’s stunning rendition of the “Star-Spangled Banner” drew a massive crowd, tourists visiting the memorial commanded to silence by her powerful vocals.

“And thy rocket’s red glare/ Thy bombs bursting in air,” Swain sang with pure passion. “Gave proof through thee night/ That our flag was still there.”

The “Star-Spangled Banner” was written by Francis Scott Keys during the War of 1812 when the British returned to the United States in attempt to reclaim the land. Keys was inspired to write the poem following the bloody battle of Fort McHenry in 1815, drawing inspiration from America’s brutal infliction on the British army even though they lost the battle.

You can watch the video below.