By Manly Bryant on October 12, 2016
Advertisement 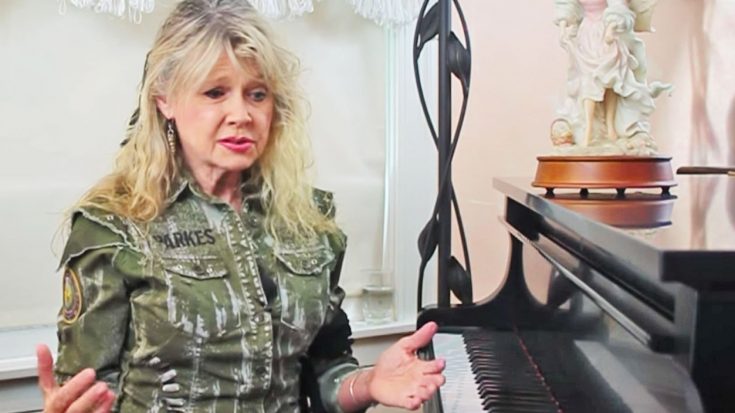 “I believe there are angels among us,” was all songwriter Becky Hobbs could make sense of after enduring the terrifying incident that nearly took her life. With those seven words, she went on to pen one of Alabama‘s most inspirational songs, “Angels Among Us.”

During Christmas time in 1985, Hobbs began having premonitions that she was going to be in a terrible accident, the fear even forcing her to pull over while she and a close friend were driving to Oklahoma for Christmas. After safely returning home to Nashville after Christmas, Hobbs began to feel like the worst was behind her, a feeling that proved short-lived.

While making a birthday cake for herself early in the morning of her birthday on January 24, 1986, the songwriter had another premonition.

“A force took a hold of my arm and took me out into my front yard,” she recalls. “I looked up at the January sky and asked, ‘What? What is it that you’re trying to tell me?’ And a deep masculine voice told me ‘Be careful. This may be your last birthday.'”

Randy Owen (Alabama) & Becky Hobbs. She wrote the song "Angels Among Us" that Alabama recorded.

Hobbs became overtaken by that same ominous feeling and became weak in the knees. She did not take the force’s warning lightly. On the ride home after a show, Hobbs and her band found themselves stopped at a four-way light on a rainy night. Hobbs, on alert, spotted an 18-wheeler barreling towards them just as the light was turning green.

“At that moment our light turned green and I felt our driver take his foot off the break,” she continues. “In that second I got that same premonition and I yelled out for our driver – his name was randy – Randy to stop.”

A Song Fueled By Inspiration

Her quick thinking led to their survival as well as the creation of “Angel’s Among Us.” Hobbs spent the next few years writing the song before asking fellow writer Dan Goodman to help her finish it out.

You can hear Becky’s full story in the video below.