Wynonna Judd Cries While Singing “I Can Only Imagine,” A Song She Says “Saved Her” 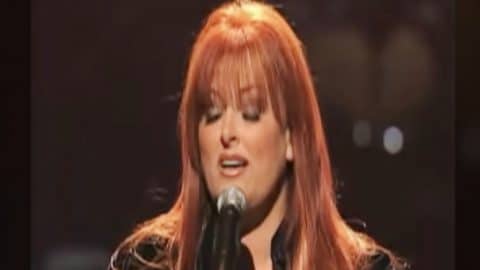 Country music superstar, Wynonna Judd, is known for pushing the boundaries of country music and for performing and recording heartfelt songs that deeply resonate with fans.

Her emotional rendition of “I Can Only Imagine“ by Christian rock band, Mercyme, is no different! It is undoubtedly one of the most moving performances we’ve seen from Wynonna.

“This next song saved me through a time, you know how music does that? How you walk through that time and there’s always a song there,” she told the audience.

Wynonna shared her personal connection to the song saying that it saved her during a dark period in her life after she lost her father. whom she had never met. She had an epiphany after listening to the beautiful song: “Though I never got to meet my Earthly Father, I will meet my Heavenly Father.”

We’re so thankful that Wynonna shared her heart with us in the form of this touching rendition of “I Can Only Imagine.”

Watch the stunning performance below! It’ll blow you away!