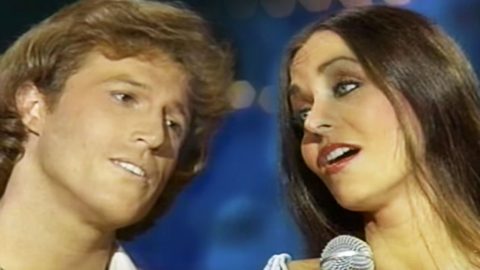 Love is in the air as these two beloved singers deliver one of the most enchanting duets of the 80s!

41 years ago Crystal Gayle hit #1 on the Billboard country singles chart with “Don't It Make My Brown Eyes Blue". In 1999, the song was recognized by ASCAP as one of the ten most-performed songs of the 20th century. #MusicIsLife pic.twitter.com/DLrkDu77uU

Being the sister of Loretta Lynn, Gayle began her rise to fame on the country charts, but much of her music found its way on the pop charts after her first smash hit stormed nearly every chart!

In this stunning flashback to the early 80s, Gayle teams up with Bee Gees member and international icon, Andy Gibb for a mash-up performance of “Don’t It Make My Brown Eyes Blue” and “If You Ever Change Your Mind”.

This dazzling showcase of unmatched talent and sweet emotion will have you falling in love with these two all over again!

Watch the full performance in the video below!