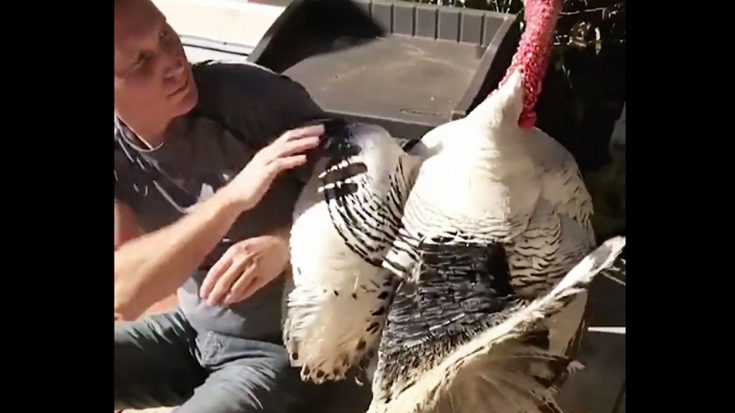 Albert The Turkey was given quite the alternative story when his butcher farm life was quickly reversed and he was adopted as a family pet! Intended to be a delicious meal, this bird’s life was remarkably spared when a family brought home the feathery friend and noticed his love for people and socializing!

His rescue dad wrote on the Turkey’s social media page, “Albert LOVES being picked up and giving hugs. He will spend all day hanging around the family and will follow me anywhere I go. He waits outside every night for me to pick him up and put him to bed!”

A video of Albert hugging his adoptive dad went viral, showcasing the bird stretching out his wings and wrapping them around the man! The two held the hug for quite some time, as Albert soon pulled in his wings and continued to cuddle with his unlikely father! However, this bird is very passionate about his bonding time, snapping at the family dog that snuck up and tried to get in on the heartwarming moment!

Viewers were blown away by the bird, utterly shocked that Albert was not only incredibly social, but unbelievably loving! His dad added, “We love Albert and we love to share all his crazy antics and hope that people see Turkeys as more than food.” Albert also has a girlfriend in which the family assured readers that the two are working hard at making baby Alberts and continuing the line of love!

You can check out the incredible video below!