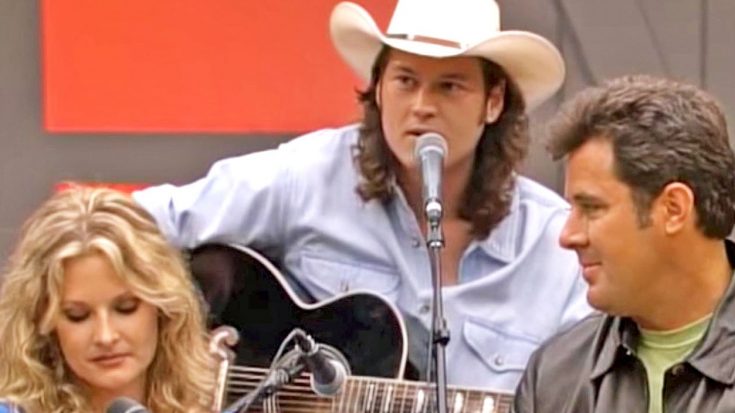 The Start Of Shelton’s Success

It’s hard to imagine it now, but there once was a world where Blake Shelton wasn’t one of the biggest names in country music. Now, he has over 20 number one hits and is one of the most successful artists in the genre’s history.

Shelton’s extraordinary career got its start with a little love song called “Austin.”

Released in 2001, “Austin” was Shelton’s debut single. The song tells the story of a woman who lives in Austin who tries to call a former flame. She ends up getting his answering machine, but is shocked when she hears him proclaim on his message, “and P.S. if this is Austin, I still love you.”

A Trip Back In Time

The song’s heart-tugging lyrics and Shelton’s powerful delivery ensured that “Austin” would be a major hit. “Austin” allowed Shelton to make his mark on country music from the get-go, since it snagged the number one spot on the Billboard country chart.

It experienced additional success on the Billboard Hot 100, where it snuck into the Top 20 to rest comfortably at the 18th position.

Shelton continues to perform “Austin” during his shows, but one of our favorite performances of his comes from back in the day.

A clip of a young Shelton singing “Austin” resurfaced on the Country Road TV YouTube channel. While we aren’t sure what year it’s from exactly, we can tell that it was from the early stage of Shelton’s career.

With a small group of spectators seated around him, including Vince Gill, Shelton delivered an intimate performance of his breakout hit. His performance was the definition of unplugged, as he had nothing but his own acoustic guitar to back him up.

In Awe Of “Austin”

The stripped-down arrangement gave Shelton the chance to showcase the depths of his talent. His small audience was captivated by his singing, which made at least one person’s jaw drop in awe.

You’re sure to be equally enchanted by Shelton’s acoustic performance of “Austin.” It’s no wonder why the young man in this video is now one of country music’s biggest stars.

If you haven’t gotten enough of listening to “Austin” yet, watch Shelton sing it live in more modern times below.