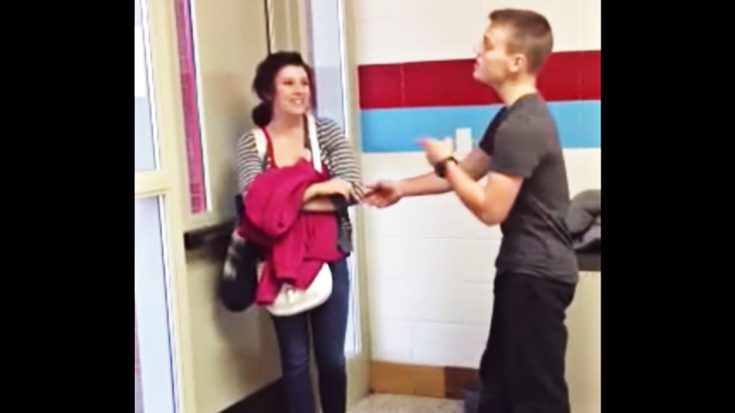 Catching her eye in the hallway, this young man gave out his best rendition of a beloved hit sung by many of the world’s favorite country artists.

As the camera begins rolling, the friends of this young fella crowd around while he asks a random girl in the hallway what she would like for him to sing. Rambling off a couple different genres, he finally stops on country music when she indicates that’s her favorite.

He took off his jacket and stretched a little before opening his mouth and letting out a soft, yet clear note, kicking off an a cappella rendition of “Bless The Broken Road.” The young man then takes her hand and pours his country boy heart out to her in one of the sweetest ways possible – something she surely took notice of!

“Bless The Broken Road” was originally written by Marcus Hummon, Bobby Boyd, and Jeff Hanna and first recorded by the Nitty Gritty Dirt Band in the mid-nineties. The song was later covered by Rascal Flatts, who earned a No. 1 hit and a Grammy Award for the song.

Take a peek at this incredibly talented young man serenading a random girl he encountered in the hallway below and let us know what you think of his performance in the comments.