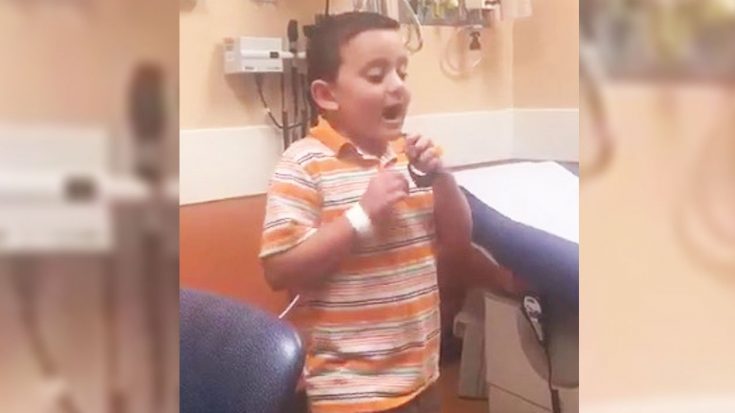 Music can have almost magical powers at times. It can bring people together in times of chaos, offer a source of encouragement, and even provide calm and healing.

One little boy serves as living proof of music’s healing capabilities. That little boy is named Reed Arnett, and we think it’s safe to say that he may be the biggest fan of the Oak Ridge Boys that we have ever seen.

The adorable video shows him singing the Oak Ridge Boys’ signature hit, “Elvira.” Their version of the song was released in 1981, and it became an instant hit. It reached the top spot on the Billboard Hot Country Songs chart and also crossed over to the Billboard Hot 100, where it peaked at the fifth position.

Before long, the Oak Ridge Boys’ recording of “Elvira” had managed to sell over two million copies. “Elvira” was certified Double Platinum by the RIAA, which was a ranking that it shared with only one other song for a while…Kenny Rogers and Dolly Parton‘s “Islands in the Stream.”

The popularity of “Elvira” has ensured its timelessness, and it has been passed down through generations of country fans. Reed is one of the song’s youngest and most enthusiastic fans, as he made clear during a recent doctor’s visit.

According to one person who appears to be Reed’s teacher, the young boy is a cancer survivor. As she wrote, Reed had been cancer free for four months at the time the video was posted in 2017.

“True definition of a survivor and joy!” she wrote. “Only 4 months cancer free. ‘Elvira’ is our favorite song in our first grade class with Mr. Reed!!”

Now that he’s cancer free, Reed decided to celebrate by singing “Elvira” for his nurses. The two nurses couldn’t help but smile and dance along as Reed put on an entertaining show for them.

Reed’s performance also helped bring some joy to the Oak Ridge Boys themselves. The group happened to come across the video, and shared it with their own Twitter followers.

You can watch Reed’s remarkable performance of “Elvira” in the clip below. He’s such a cutie!

Just a little something to bring a smile to your face this morning. Reed entertaining the nurses…@oakridgeboys @joebonsall @MistyWilson134 pic.twitter.com/hd08KNhljl