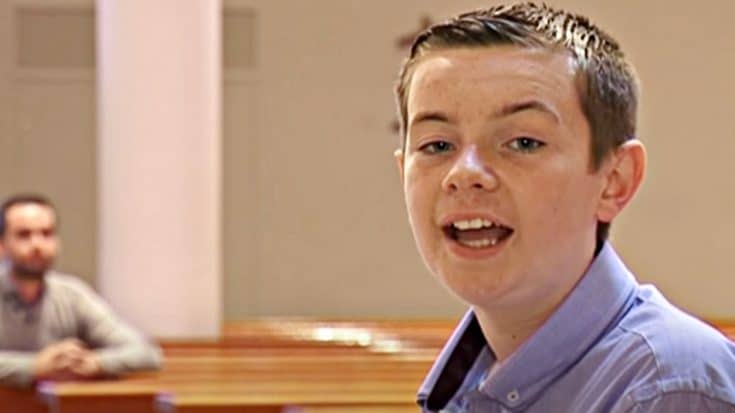 One young boy made George Strait and country music fans incredibly proud when his love for the classics prompted the boy to record an incredible George Strait cover that sent viewers to tears. Keelan sure knows how to pick the favorites, choosing to take on George Strait’s heavenly hit “I Saw God Today”.

Recreating his own authentic music video, the young boy wowed viewers with the help of some friends and his breathtaking talent. Wearing a simple button up and dark washed jeans, the young man began his wonderfully shot video in an empty church, setting a somber but uplifting tone for his performance. “I’ve been to church/ I’ve read the book/ I know He’s there/ But I don’t look/ Near as often as I should/ His fingerprints are everywhere/ I just look down and stop and stare/ Open my eyes and then I swear/ Saw God Today,” he angelically sang.

The video showcased various moments, from a man experiencing fatherhood for the very first time to a woman with her newborn baby basking in her love for her child. Viewers were moved to tears by the touching tribute and Keelan’s haunting voice that carried this tune to new heights and adventures.

Found on Strait’s 2008 released album Troubadour, the ballad snagged Strait his 43rd Billboard Number One and even earned a CMA Award in 2008 for “Single of the Year”.

You can experience Keelan’s magical performance below.