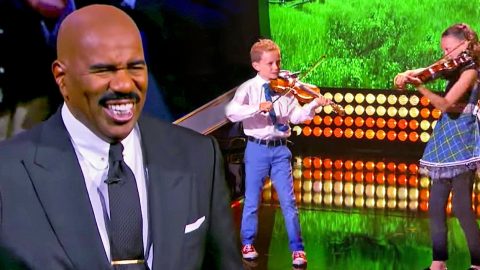 As the host of Little Big Shots, Steve Harvey has witnessed some extraordinary talent.

But nothing ever could have prepared him for the skill showcased by a group of fiddle-playing siblings.

The MacMaster Leahy Kids were born with fiddle playing talent in their blood. Their mother, Natalie MacMaster, is an award-winning fiddler from Cape Breton, Nova Scotia. Their father, Donnell Leahy, is a highly respected fiddler from Lakefield, Ontario.

It basically goes without saying that the children grew up surrounded by music.

A very exciting weekend is coming up for The MacMaster Leahy Kids. We have been given the official word that the kids will appear on this week's episode of @nbclittlebigshots this Sunday (April 23rd) at 8pm/7c on @nbc with host Steve Harvey! Mark your calendars and get yourself excited for Sunday! 🎉🎊

Siblings Mary Frances, Michael, Clare, and Julia each learned to play the fiddle and several other instruments. Since they are homeschooled, the children will frequently perform alongside their parents on stage.

But the kids got the chance to perform all on their own when they appeared on Little Big Shots. And let us tell you, they put on one unforgettable show.

Harvey took his spot at the side of the stage and prepared for the siblings’ performance. He looked completely awestruck as one of the girls started playing all on her own.

As the rest of her siblings joined in, Harvey appeared even more impressed than he did before.

So imagine Harvey’s surprise when the kids put down their fiddles and started dancing up a storm! As it turns out, all of the kids also know how to step dance, and they can do it quite well.

Just like before, the one girl started off dancing on her own before each of her siblings joined in. Harvey looked thrilled beyond belief, and the entire crowd soared to their feet with a thunderous roar.

Once you watch these kids’ performance below, you’ll be able to understand why everyone reacted in such a way!