Young Soldier Dresses As Santa To Surprise Mom At Work 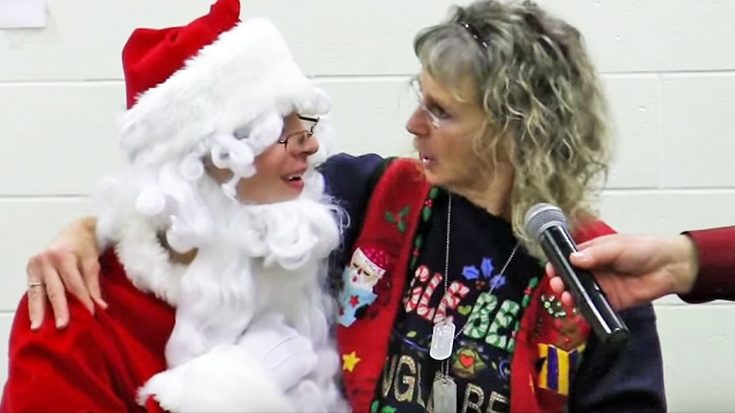 While the holidays are known for time spent with loved ones and being thankful for our blessings, we often forget that many men and women, specifically those of military affiliation, aren’t always granted the opportunity of being home. One soldier was deemed incredibly lucky when he was given the unlikely chance of coming home for Christmas, an opportunity he used to surprise his mother in the best way possible.

Spc. Ethan Harris, having returned to U.S. soil after a deployment to Afghanistan, recruited his father’s help for this exceptional surprise, as his proud papa admitted, “It was very hard and, yeah, I lied a lot. Santa will take care of me, I’m sure.”

Harris snuck home and was hiding for two days, until he was able to emerge at his mother’s work Christmas party dressed as Santa Claus. As a raffle was underway, Harris entered the room in a jolly red suit.

Staff members were to be called out throughout the raffle to sit on Santa’s lap and to tell them what they wanted for Christmas. Of course, Harris’ mother was chosen first and, after a few good jokes with the jolly man, she explained that one of her sons had just returned to U.S soil and she was beyond thrilled at the news.

“Where’s he at?“, Santa asked amidst the crowd’s applause. “He’s a Fort Campbell,” his mother responds. “You sure?” Santa asks as he removes the white beard to reveal Harris. His mother, elated and in utter shock, clung to her son and began to cry!

We’re so happy to see this mother given one of the greatest gifts of all! Watch the video below and tell us if there’s someone you’d like home for the holidays.