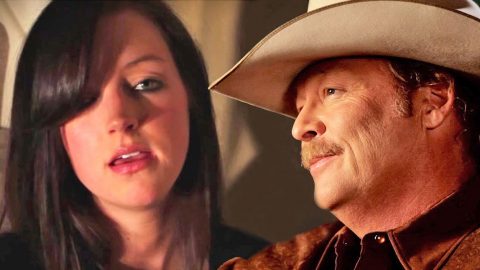 Alan Jackson has proven time and time again that he knows how to write songs that speak to the heart. There are countless examples of Jackson’s songwriting talent, particularly in emotional tunes such as “Remember When” and “Where Were You (When the World Stopped Turning).”

Alan channeled those same songwriting talents into a deeply personal song that he released in 2009 called “Sissy’s Song.” He explained tragic the story behind it in an interview with The Boot in 2015.

The song was named in honor of Leslie “Sissy” Fitzgerald, who worked for Alan and his family every day as a housekeeper. The Jacksons grew close to Sissy and treasured her as a member of their family. That’s why they were devastated when they heard the news on May 20, 2007 that Sissy had been killed in a motorcycle accident.

Alan wrote “Sissy’s Song” in tribute to his family’s beloved housekeeper. He originally recorded it with only vocals and acoustic guitar with the intention of having it played at Sissy’s funeral. When people at Alan’s label heard the song, they encouraged him to put it on an album. He did just that, and the song became a Top 10 country hit.

Few others have ever covered Alan’s “Sissy’s Song,” but there is one young woman out there who delivered a particularly moving rendition. If you haven’t heard of Meghan Knight before, then you’re missing out. This talented young lady has her own YouTube channel, on which she’s covered country greats such as Sara Evans and Martina McBride.

In 2011, Meghan offered her extraordinary talent to “Sissy’s Song.” But beyond the raw beauty of the cover, it is all the more meaingful because of the reason why she recorded it.

Nicholas LaRoche is known around the world as an accomplished figure skater. To help other athletes, Nicholas and his sister, Tricia, co-founded the organization the US Athletic Foundation, which helps athletes obtain funding for their sports.

On August 12, 2011, Nicholas skated in a benefit show for his foundation, which also served as a tribute to his late mother, Bernadette “Bunny” LaRoche. Before Bunny passed away on July 1, 2011, she could be seen at Nicholas’ many skating shows and competitions, always cheering him on.

“‘Bunny’ took great pride in her son Nick’s skating career,” her obituary reads. “She enjoyed watching him skate and was his greatest supporter.”

To make his tribute to his mother all the more meaningful, Nicholas had Meghan record a rendition of “Sissy’s Song” for him. When it came time for the show, Nicholas skated to Meghan’s recording in his mother’s honor.

Meghan made sure to draw attention to the US Athletic Foundation in her video, and even donated all iTunes proceeds from the song to the organization. We’re sure that there were plenty of downloads, because Meghan delivered a stunning performance is sure to give you goosebumps and bring tears to your eyes.

Tune in to the video below to watch Meghan’s profound tribute to Bunny LaRoche with “Sissy’s Song.” We think Alan would be proud to hear his song being used in such a beautiful way.