By Manly Bryant on September 26, 2018
Advertisement 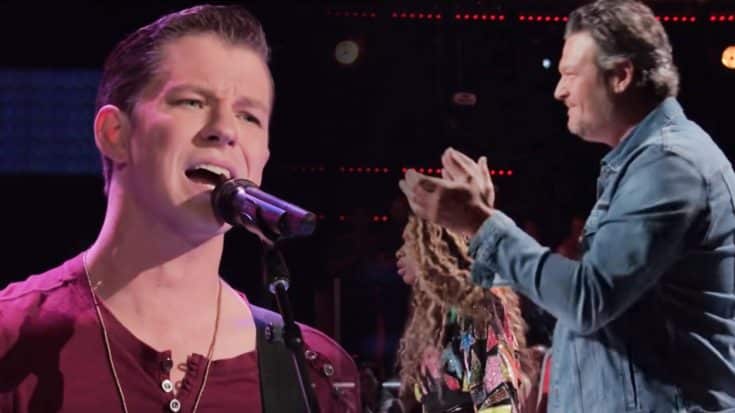 Taking to the stage for the chance of a lifetime, this young and soulful Texan singer unleashed a powerhouse cover of B.B. King’s undeniable classic “The Thrill Is Gone” and earned a multi-chair turn…but it was Blake Shelton‘s reaction that surprised many! (Check out the full video below.)

Michael Lee, who roared onto the Voice stage with a voice like no other, has been hard at work crafting his own style and soul-piercing sound that captured the attention of each and every coach.

His deep tone rang out across the studio as the guitar soloist leaned into this searing moment and poured his soul into a tribute to his favorite artist – B.B. King.

The Fort Worth singer has been raised around blues music his entire life and spent much of his younger years in blues clubs “receiving an ivy league education” by watching and playing with longtime blues legends, his website says.

Levine, who tried to appeal to Lee with the fact he was the first to turn around, didn’t quite have enough to sell him on his team – but Shelton, on the other hand, had a lot to say!

“You literally beat me to death with that vocal performance,” Shelton said in absolute awe. “I was thinkin the whole time ‘He’s soulful, it’s the blues’ – and then I was like ‘Screw it! I can coach this guy, I think this would be a match made in heaven!”

While Lee had multiple coaches vying for his time and attention, he opened up on social media about which coach he related most to.

“Had to be my fellow North Texan, Kelly Clarkson,” he admitted.

But does that mean he would have chosen her as a coach if she would have turned her chair for him? Nobody knows for sure!

When all was said and done following this knock-out Voice audition, Michael Lee decided to choose the country crooner over Adam Levine’s plea as his first vote on the show.

Watch the full video below for every single, searing note of his major television debut – and tell us who you think he should have chosen as a coach!