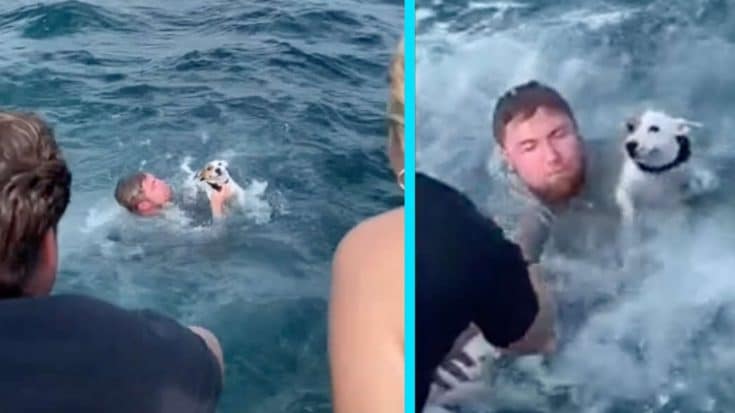 Photographer and TikToker Bryn Crowell shared a heartwarming moment she and a group of people on a boat stopped in the middle of the ocean to rescue someone’s pet that had gotten lost at sea.

The poor pooch can be seen in the video swimming on the open sea as one person jumped out of Bryn’s boat and was swimming toward the dog.

The man grabbed the small white dog and swam back towards the boat and tried to hand the dog up to two people standing on the boat, but it was a bit difficult due to the rough waves tossing them up and down.

Eventually, the two people on the boat were able to bend down far enough to grab ahold of the dog and pull it onto the dry boat. The exhausted dog shook the water off its fur coat while it made its rounds to the people on the boat appearing to thank them for saving him.

Bryn posted the dramatic footage to TikTok saying, “My friends and I saved a dog we found swimming alone in the middle of the ocean.”

The post received more than 13 million views within a short amount of time and with viewers flocking to praise the group for saving the dog.

“Thank you to the man who jumped into the ocean to save that dog. I appreciate you,” user saaal994 wrote on TikTok. “Bless, you guys were at the right place at the right time,” Ghostryderrc agreed.

Another user, Baloo_the_hound added, “This is why your dog should always have a life vest on! My dog is a strong swimmer and we always use one. They are so lucky!”

Even with all the good praises, there were still a few skeptics out there that believe that the group simply threw the dog in the water just to make a heartwarming TikTok video.

TikTok user DaftyOne claimed the video was “so staged” while another user, Matt Cutshall, said: “The things people stage for TikTok.”

In response to all the skepticism, Bryn later posted a series of follow-up videos showing a text from the owner of the dog that the group contacted after they found a phone number on the collar of the pooch.

The text revealed that within 20 minutes of finding the dog, they had texted the number and brought him back to his rightful owners who were “crying and thankful he was safe.”

After speaking with the owner, Bryn finally got an answer on how the dog ended up way out in the middle of the ocean in the first place.

According to the messages, the dog, who is called Zuko, is “a puppy and still very new to being on a boat. He was hopping around the back of the boat ‘biting’ at the waves that were passing by, and I guess in one of these moments he must’ve jumped a little too high and jumped overboard,” his owner explained. “Once we noticed he was missing we all searched the boat thinking he was hiding in one of the rooms with his bone. We kept going up and down where we had traveled trying to retrace our path and we had no luck … after 7 mental breakdowns you guys called us and it was a miracle.”

Zuko’s owner said he had “never done anything like this before” and even though it was an extremely stressful situation for them to be in, thy were “so happy” he was found alive and doing well.

Watch Footage Of The Rescue Video Below