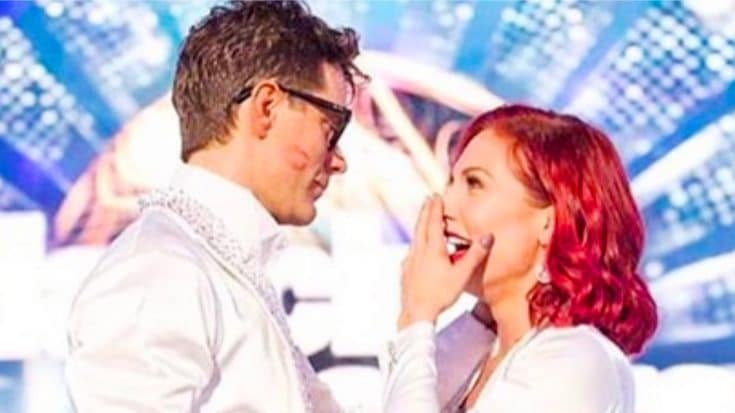 Every Dancing with the Stars season, it seems that romance rumors pop up about at least one of the dancing pairs. Sometimes these rumors turn out to be true, but most of the time, they’re just wishful thinking on the part of the fans.

It’s easy to see why such rumors start. After all, the dancers and their celebrity partners can bring some serious chemistry to their routines.

During Season 27, country music radio host Bobby Bones and his partner, Sharna Burgess, found themselves as the main focus of the season’s romance rumors. Watching the two of them dance, it’s no surprise why many viewers suspected they were secretly dating.

What They Had To Say…

Wanting to get the answer from the sources themselves, Entertainment Tonight asked the dancing duo about the romance rumors following their steamy Disney Night dance.

But the two of them didn’t give in that easy. They neither confirmed nor denied that they were dating. Their answers made it clear they shared a great affection for each other, yet they steered clear of saying if they were in a relationship.

“I think we’re two people that, from the beginning, are just really blunt and honest with each other and that allowed us to get to know each other very very quickly,” Burgess said. “We’ve bonded a lot, I do love him. That’s not a lie.”

The Evidence Seems To Build Up

Throughout the season, Bones made it clear that he was indeed dating someone, but never said if it was his DWTS partner or not. This fueled further speculation, even from his own radio show co-host, Lunchbox.

At one point, Lunchbox even thought he caught Bones and Burgess kissing in the background of another star’s interview.

The romance rumors swirled even more following the CMA Awards in November. Bones and Burgess were presenters during the ceremony, and also walked the red carpet together.

Those who watched videos and looked at photos from the event could have sworn that the two were dating based on their sweet interactions with each other.

When you’re sitting front row at the @cma awards . And they give you free chicken as a joke. You still eat it .

At Last, You Have Your Answer

Not long after Bones and Burgess handed a CMA trophy to a country star, the two of them were given the mirrorball trophy for winning their season of DWTS. The win was Burgess’ first since she started the show.

A week after his big win, Bones sat down for a special edition of his Bobbycast podcast to spill some secrets about his time on the show. Of course, he couldn’t do such an interview without addressing the romance rumors swirling around him and Burgess.

Finally, Bones gave a straight answer to the question people have been asking him for weeks,”Are you dating or not?” And the answer is…they’re not.

As Bones explained, he and Burgess actually had a conversation before their season started, and during that conversation they agreed they wouldn’t date. So the two of them are simply good friends.

Based on their dances, they could have had us fooled! What do y’all think of Bones’ big reveal? Are you surprised to hear that he and Burgess never dated, or did you suspect as much all along?