Bobcat Frozen To Tracks Saved Minutes Before Train Speeds By 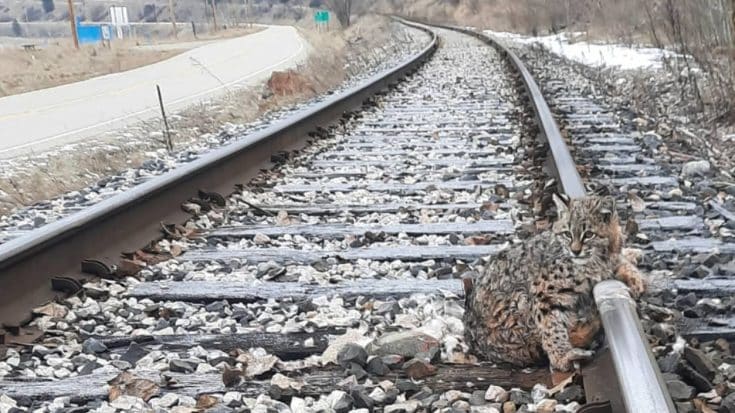 It had just captured, killed, and was feasting on a fresh waterduck. The bobcat must have jumped into the water to capture the animal because it was wet and both his hind legs were frozen to the tracks.

“At first we approached it, and we were going to actually cover it up with a coat that we had in the truck. It wasn’t very happy,” Coby told Radio West.

The men called their boss and told them about the situation and he said he would bring a warm pail of warm water to pour over its legs to free it. The men stayed with the bobcat for about 45 minutes to an hour while it hissed and growled at them until their boss could get there.

Once he arrived, he poured warm water over its legs and the animal was able to get free. Even though it wasn’t stuck anymore Coby said the bobcat did not want to leave.

He believes it was protecting its kill and so it just stood its ground until they finally were able to scare it off. The guys threw the waterduck carcass off to the side tracks so that it could come back and finish its meal. The next day they did another inspection of the railroad and found tracks of the bobcat and believe it is still alive and doing well.