By Jennifer Pernicano on April 30, 2018
Advertisement 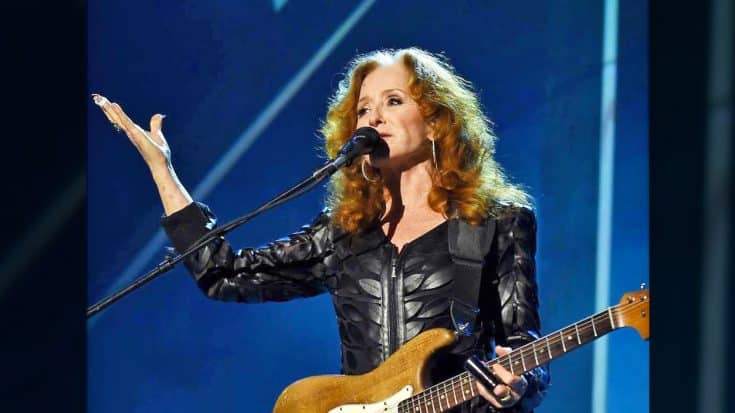 While she is not considered a country singer, many country artists list her as an inspiration and she is on Rolling Stone‘s list of “100 Greatest Singers of All Time.” Her genre also borders country, so it’s no surprise that a lot of country fans enjoy her work as well.

Bonnie Raitt was set to go on tour with fellow legend James Taylor this spring and summer, but due to “a medical situation,” Raitt is going to sit the first leg of the tour out.

Taking to Facebook to update her fans, Raitt explained that she went to her annual physical and “it was determined she needs to schedule some surgery soon.” A full recovery is expected, which is why you can expect her back on the road for the second leg.

“I’m deeply sorry to have to disappoint my fans, James and colleagues with these cancellations,” Raitt wrote. “I was so looking forward to our tour, but I’m very grateful that the doctors feel this can be taken care of with surgery. I’m feeling strong and am in great hands with my wonderful team. I fully expect to return for the second leg of the US tour in June followed by our European tour in July.”

She continued, “Thank you all for your concern and understanding that the best gift you could give me is respecting my wish for privacy and giving me space to heal. Can’t wait to see you all back on the road again soon!”

Because Raitt will not be on the first leg of the tour, which kicks off on May 8, the shows will now be called an “Evening with James Taylor & His All-Star Band.” For the May 29 show in Arizona and two nights at the Hollywood Bowl on May 31 and June 1, Taylor will be joined by special guest Sheryl Crow.

On his website, Taylor wished Raitt well by saying, “This summer was to be Bonnie’s and my second summer touring together. We wanted to do it again because it was such good fun the first time, we didn’t want it to end. We are so looking forward to having her rejoin the tour in mid-June. Of course, there is no question as to the priority of your health, Bonnie. You will be constantly in our hearts and minds until we see you in June.”

Raitt will be re-joining the tour on June 22. Our thoughts and prayers are with her for a speedy recovery.