By Miranda Raye on September 8, 2020
Advertisement 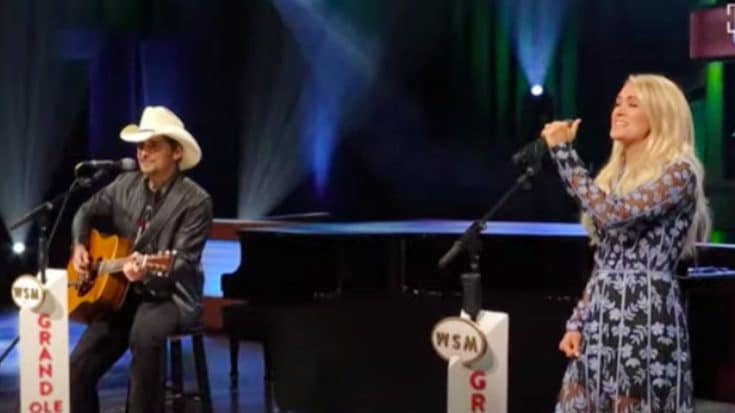 Conway Twitty and Loretta Lynn‘s “Louisiana Woman, Mississippi Man” is known as one of the most iconic and recognizable duets in country music history. The song, which was released in 1973, topped the country charts in both the U.S. and Canada.

The song was eventually nominated for the Grammy Award for Best Country Vocal Performance by a Duo or Group.

Years later, another pair of country singers revived the song. Those artists were Brad Paisley and Carrie Underwood, who performed “Louisiana Woman, Mississippi Man” for the Carrie Underwood: All Star Holiday Special.

Paisley and Underwood have remained good friends. Two years after they sang together on Underwood’s holiday special, they released their own duet, “Remind Me.”

They also served as co-hosts of the CMA Awards for 11 years, so they’re now quite used to performing together.

But even though they’ve shared the stage many times since Underwood’s 2009 holiday special, that was the first (and only) time they sang “Louisiana Woman, Mississippi Man.”

That all changed in September 2020 when Paisley and Underwood reunited on the Opry stage. They decided to sing “Louisiana Woman, Mississippi Man” again after all of these years.

Before their performance, Paisley warned everyone they only rehearsed the song once before their Opry show, and said it had been some time since they last sang it together.

But Paisley had no need to worry. He and Underwood sang the song with a bunch of spunk, and ended up delivering a performance that would have made both Lynn and Twitty proud.

Check out Paisley and Underwood’s cover of “Louisiana Woman, Mississppi Man” by tuning in to the video below.