By Miranda Raye on March 18, 2020
Advertisement 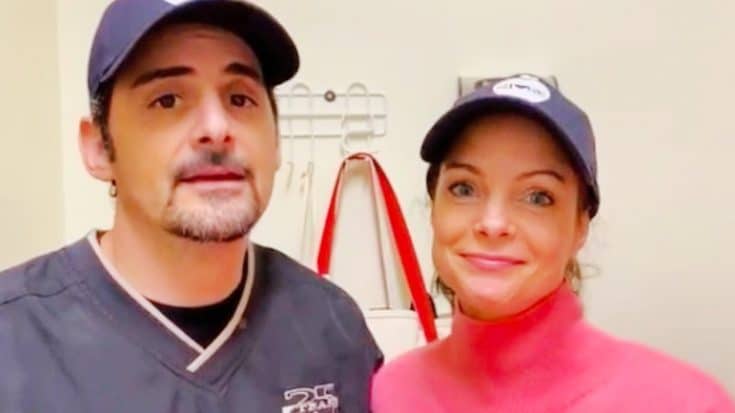 In the fall of 2018, Brad Paisley and his wife, actress Kimberly Williams-Paisley, announced their plans to open The Store, “A Non-Profit Free Grocery Store for Individuals and Families Seeking Self-Sufficiency.” Work on the building began some time ago, but it still wasn’t ready to open at the start of this year.

However, changing times and changing needs pushed Brad, Kimberly, and The Store’s volunteers to open the facility early.

In light of the recent Tennessee tornados and the current COVID-19 outbreak, The Store opened early in order to provide immediate assistance to those in need.

Brad and Kimberly announced The Store’s early opening in a video on social media:

“Due to the hard work of many dedicated volunteers, partners and donors, The Store has been able to open earlier than anticipated,” Kimberly said in her post’s caption. “We can now serve the needs of the community beyond the initial scope of our original mission.”

RepostBy @kimberlywilliamspaisley: "It’s easy to feel overwhelmed right now. But here is a little bit of good news. Due to the hard work of many dedicated volunteers, partners and donors, The Store has been able to open earlier than anticipated. We can now serve the needs of the community beyond the initial scope of our original mission. In conjunction with our referral partners, we are now also offering aid to those affected by the recent tornadoes and/or the coronavirus outbreak. The Store will be open tomorrow, Saturday from 11:00 to 5:00pm. To volunteer services or resources please visit Thestore.org . THANK YOU!! @thestore_nashville #nashvillestrong ? @belmontu #loveatthecore" (via #InstaRepost @AppsKottage)

Now, just a few days after making that announcement, Brad and Kimberly have worked to expand The Store’s services even further in order to help the senior citizens in the area.

In a video, Brad announced that The Store is now running a free grocery delivery service for the elderly members of their community. Since the elderly are in the most “at risk” group where COVID-19 is concerned, they are extremely vulnerable in public situations.

“They don’t need to be out,” Brad said in his video message.

But of course, people still need groceries. So Brad says The Store will now deliver a free week’s worth of groceries to senior citizens who sign up on the delivery list.

In addition, the physical Store is open on certain dates for people to obtain their groceries. The Store will also offer assistance to those who have been recently unemployed due to the closures surrounding the COVID-19 outbreak.

“Let’s get through this,” Brad said in his message. You can watch the full video below.

Hats off to Brad, Kimberly, and all of the volunteers at The Store for stepping up to help their community during this trying time.

So, in light of changing times, @thestore_nashville is mobilizing delivery of a week’s groceries to our elderly neighbors in Edgehill and Berry Hill on Wednesday’s/Thursdays. If anyone needs to be included on this list, we urge them to contact [email protected] Also We will continue to operate regular hours 1-7 Th/F 11-5 Sat for walk ins but please bring ID and either proof of income, proof of residence, or statement of unemployment for our recently unemployed neighbors. #nashvillestrong