By Jennifer Pernicano on April 5, 2020
Advertisement 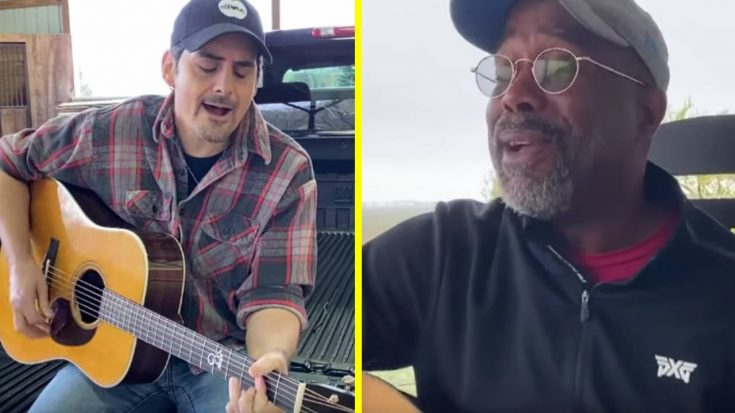 Instead of airing the ACM Awards, which were set to take place on April 5, 2020, CBS aired a TV special titled ACM Presents: Our Country.

The two-hour event offered fans a unique way to enjoy their favorite country stars’ performances with each country artist performing from the comfort of their own homes.

It will be a concert like no other. Get ready for ACM Presents: Our Country Sunday, April 5 at 8/7c on CBS. #ACMOurCountry

Posted by ACM – Academy of Country Music on Wednesday, April 1, 2020

Brad Paisley and Darius Rucker teamed up not once, but twice during the televised event. They closed out the show with a tribute to the late Kenny Rogers, but earlier in the night, they performed “Lucille” and “The Gambler.”

For the other duet, the two award-winning singers teamed up for a medley of Paisley’s song “Mud On The Tires” and Rucker’s tune “Wagon Wheel.”

Paisley kicked off the duet sitting in the back of his truck and sang “Mud On The Tires” almost in its entirety before he Facetimed Rucker, who then began singing “Wagon Wheel”! Paisley chimed in here and there with some harmonies that were literally music to our ears!

Check out the duet below.