Brad Paisley Gets Invite To Fan’s Online Birthday Party, He Shows Up

By Miranda Raye on April 14, 2020
Advertisement 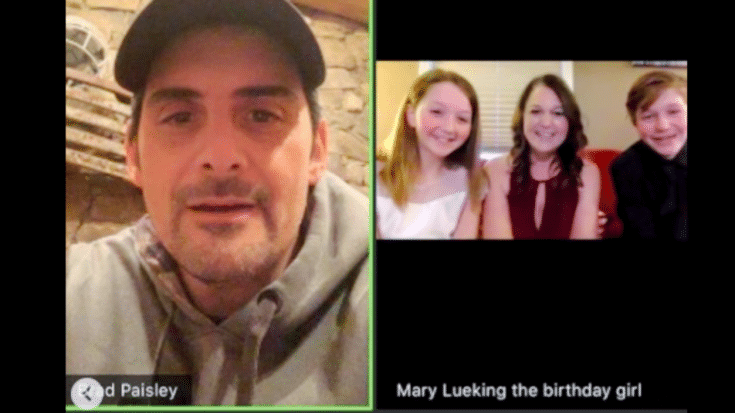 Because of the COVID-19 pandemic, people have been left to celebrate special events, milestones, and birthdays in isolation. But people have still found ways to celebrate the special moments in their loved ones’ lives, even if it is from a distance.

For example, a couple named Jennifer and Dustin Sanders recently had to cancel their gender reveal party due to the current restrictions on large gatherings. So they hopped on Facebook Live to reveal they’re expecting a baby girl!

After sharing that video, the couple’s friends and family drove by their house to surprise them. They all covered their cars with pink balloons and other decorations to celebrate the upcoming arrival of Jennifer and Dustin’s daughter.

One tool that has become invaluable during this time is the video conferencing system Zoom. The system allows people to hop on a video call with multiple people, and they can see them all at once.

Zoom has been useful to businesses during this time, since it gives employees a way to see each other and communicate face-to-face. It has also been used to host virtual family game nights and other social events, such as birthday parties.

In Illinois, a girl named Mary wasn’t able to celebrate her birthday with her family and friends in person. So they all hopped on a Zoom video call to host a virtual birthday party for her. Everyone dressed up in their finest party attire and some of them hung party decorations.

Mary’s sister texted me to invite me to her birthday party on Zoom, so I crashed it. Happy Birthday Mary! For all zoom party invites, just text me at 615-235-5921… I obviously now do birthdays. Not busy.

Brad has a phone number set up that fans can text, and he’ll often respond to the messages he gets. He said Mary’s sister sent a message to that number inviting him to her birthday party on Zoom.

So he decided to crash the party and make Mary’s birthday one she’ll never forget!

“I obviously now do birthdays,” Brad wrote on Instagram. “Not busy.” He also told his fans to go ahead and invite him to other Zoom parties by texting his number.

Brad posted a few photos of his visit with the guests who signed on for Mary’s virtual birthday party. Everyone was thrilled to see him there, as you can see from the looks on their faces!

The same pictures were also posted to Brad’s Instagram Story. In his Story, he shared how “crazy” it was that he was able to hop on a video call to celebrate someone’s birthday in Illinois from his home in Tennessee.

“The crazy thing about this time is the way we’re doing crazy cool things we wouldn’t do otherwise,” he wrote.

Hats off to Brad for jumping on the video call and making Mary’s birthday a special one!

Brad has been going above and beyond to make his fans’ days during this time of self-quarantine and social distancing. He has been posting musical performances on his social media accounts for fans to enjoy, including one video he shared on Easter.

Check out that Easter performance below.