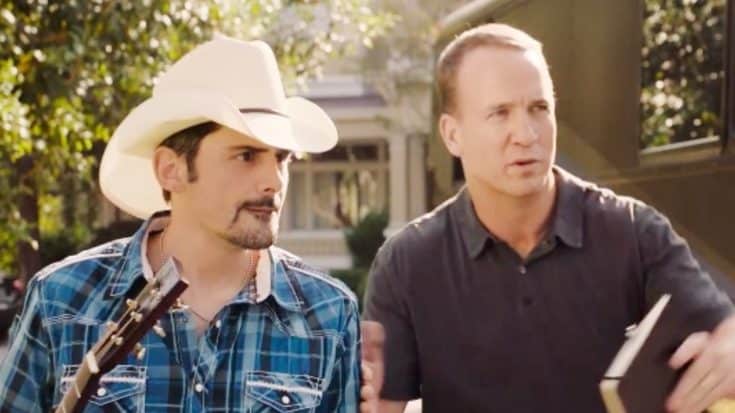 Out of all of the commercial jingles out there, Nationwide’s is arguably one of the catchiest. The insurance company has used its unforgettable jingle to its advantage, rolling out a series of commercials over the years that make the tune the star of the show.

Over time, a number of celebrities have teamed up with Nationwide to promote the company and even sing a little jingle of their own. One of the most famous commercials features now-retired NFL star Peyton Manning.

That line was later revisited in another one of Manning’s Nationwide commercials.

Another star you’ve seen work with Nationwide over the years is Brad Paisley. As an expert jingle writer as the host of the CMA Awards, Paisley seemed like the perfect pick to sing some new tunes for the insurance company.

Paisley’s initial commercials, which started rolling out in 2016, were less comical than Manning’s. Instead, the clips showed Paisley singing an extended jingle about everything that Nationwide offers its clients.

In the course of the company’s history, Paisley and Manning have been two of its most beloved spokespeople. So it only made perfect sense when, in 2017, the two of them teamed up for a set of hilarious commercials.

As much as people loved Paisley and Manning’s individual commercials, they seemed to get even more of a kick out of their collaborative ones.

Everyone’s favorite jingle-singing duo released an all-new set of commercials in September 2018, and they’re just as hilarious as ever.

Get Ready To Giggle Over These

The first of these clips shows Paisley playing his guitar to the Nationwide jingle when Manning gives him a call from outside. Telling Paisley he needs to hit the road to get inspiration for his next jingle, Manning exclaims, “We gotta get the band back together.”

Of course, that prompts Paisley to tell Manning that they never were in a band.

The whole “band” thing appears to be the running joke in the duo’s new commercials, popping up in the second one as well. This time around, the duo watches a Nationwide agent speak to a couple about bundling home and auto insurance, which sparks an idea in Manning’s mind.

When Manning tells Paisley to try combining two songs in one to make a jingle about both types of insurance, Paisley suggests they do a mashup.

“See, that’s why we’re a great band!” Manning says in response, which again, prompts Paisley to proclaim that they’re not in a band.

All of the hilarity keeps coming in a third, and shorter commercial, which Paisley shared on his Twitter. The clip shows Paisley and Manning trying to coexist on a tour bus together, with Manning continuing to insist that they’re a band.

You can catch that commercial by checking out the clip below.

Which one of Paisley and Manning’s commercials is your favorite? Hopefully there are even more to come!

That awkward moment when your hometown team goes up against your “bandmate's” alma mater. Which side are you on? #WeareNOTaband pic.twitter.com/SBUwwjMmEI