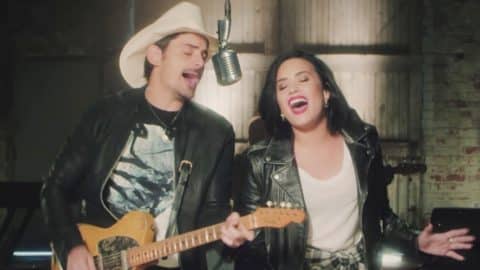 On February 2, 2020, millions of people will be tuning in to the Super Bowl to watch the two best teams in the NFL battle it out.

But before the players can start tackling each other, the game kicks off with a performance of the national anthem from a famous singer. Prior to 2019’s Super Bowl LIII, Gladys Knight did the honors, garnering high praise from people online.

In 2018, singer P!nk sang “The Star-Spangled Banner,” despite feeling under the weather.

Other Super Bowl national nthem performers include Luke Bryan, Whitney Houston, Jennifer Hudson, and many more. Well, one more singer can be added to the list: Demi Lovato.

The pop singer announced on her social media accounts that she will be “singing the National Anthem at #SBLIV,” which will be taking place in Miami.

See the full announcement below.

Singing the National Anthem at #SBLIV 🏈 🏈 🏈 See you in Miami 🌴 @NFL

Lovato has previously performed the song before a couple World Series games, a Dallas Cowboys game, as well as before the boxing match between Floyd Mayweather and Conor McGregor. While country fans may not be well-versed in Lovato’s music, she actually did record a song with Brad Paisley a few years ago called “Without A Fight.”

Although he didn’t include it on an album, the music video has received over 11.5 million views. Watch their duet below.