By Miranda Raye on November 14, 2018
Advertisement 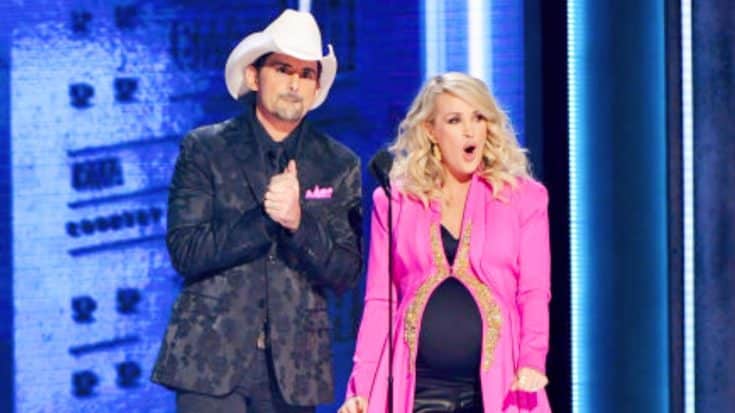 For 11 years the CMA Awards kicked off the exact same way…with a hysterical opening segment from hosts Brad Paisley and Carrie Underwood.

The two returned to host the awards for the 11th time in 2018, and fans anxiously waited to hear their hilarious jokes and parody songs.

Whose lives will be changed? #CMAawards

As always, the details of Brad and Carrie’s opening bit were kept tightly under wraps. So no one had any idea what the two superstars would say or do when they finally took to the stage during the CMA Awards on November 14, 2018.

At last, we got the chance to see the duo’s always-anticipated opening segment, and it was just as good as ever. They brought the laughs with their jokes, a handful of which were playfully aimed at their fellow country singers.

They Did The Same Thing Before

If you think back to the 2014 CMA Awards, Carrie was pregnant with her son, Isaiah. Though she and her husband, Mike Fisher, were the only ones who knew at the time that she was expecting a boy.

That all changed when Carrie shared the secret with Brad by whispering it to him during their opening bit at the CMA Awards. They moved on with their jokes, but a little later on, Brad let the baby gender news slip when he pointed to Carrie’s belly and said they should name “him” after Garth Brooks.

Even to this day, Isaiah’s gender reveal is recognized as one of Brad and Carrie’s best (and funniest) moments on the CMA Awards.

Brad Blurts Out The News Again

Carrie was expecting her second child in 2018, and once again, she and Mike knew the baby’s gender but had kept tit secret. Fans speculated she was having a girl, especially since she seemed to wear more pink after she announced her pregnancy.

Carrie insisted she was just really into pink at the time, and that it had nothing to do with the gender of her unborn child. She had also been equally persistent about making sure her baby’s gender remained secret.

But it was no longer a secret after the 2018 CMA Awards!

Brad pestered Carrie to tell him the gender of her child like she did last time, but she didn’t want to crack. He kept asking her if the baby would be a “Johnny or June” or a “Garth or Trisha” to get her to spill the beans.

Then, he tripped her up when he asked if it would be a “Willie or Waylon.” After saying that didn’t even make sense, Carrie gave in and confessed that her second child was another boy!

Just months later, Carrie gave birth to her second son. Jacob Bryan Fisher was born on January 21, just a little over a month before his big brother Isaiah turned 4.

Now it’s hard to believe that Jacob is almost a year old! Look back on the moment that Brad and Carrie “accidentally” shared his gender at the 2018 CMA Awards by tuning in to the clip below.

IT'S A BOY! Hosts @carrieunderwood and @BradPaisley open up the 2018 @CountryMusic awards with a baby gender reveal! Congrats Carrie! #CMAawards #BradBlewIt #GaryBlewIt pic.twitter.com/zJ2EWSA98c