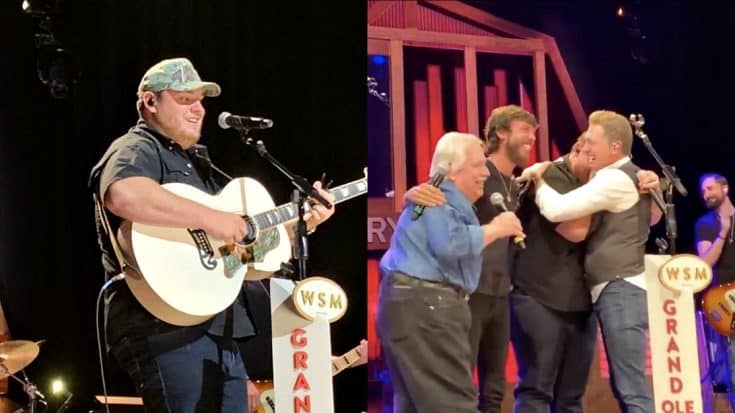 The “Beautiful Crazy” singer was performing on the iconic stage Tuesday night when Chris Janson, Craig Morgan and John Conlee joined him on stage.

“We just want to touch you,” Conlee joked with Combs. “What a career this guy is having. It is incredible. You all know that. We all know that. The Grand Ole Opry wants you to know that we just love you.”

Janson then laid his hand on Combs’ shoulder. The other men joined in and together asked, “How would you like to be the next member of the Grand Ole Opry?”

Combs couldn’t hold back the emotion or hide his shock.

Luke Combs’ career has been one that many only dream of. He released his debut album in 2017 and made history as the first artist to simultaneously top all five Billboard country charts for multiple weeks. He has five No. 1 hits at country radio to his credit with songs including “Hurricane,” “One Number Away” and “Beautiful Crazy,” which spent seven weeks atop Billboard’s country radio charts.

“Since making his Opry debut a little less than three years ago, Luke Combs has become a favorite of fans and fellow artists here at the Opry while simultaneously becoming a chart-topping bona fide country music superstar,” said Opry General Manager Sally Williams in a statement. “We’ve loved every minute of his Opry visits and are thrilled to invite him to become an official part of the Opry family. Luke’s heart is filled with love and genuine appreciation for the Opry, and we are excited this will be his musical home for the rest of what will no doubt will be a long and rewarding career full of great music.”

Congratulations to Luke Combs! See the emotional moment he was invited to join the Grand Ole Opry in the video below.

BREAKING: @lukecombs has just been invited by @cmorganmusic, @janson_chris, and John Conlee to become the newest member of the Grand Ole #Opry! pic.twitter.com/ua8FSTMPBD