By Manly Bryant on January 24, 2023
Advertisement 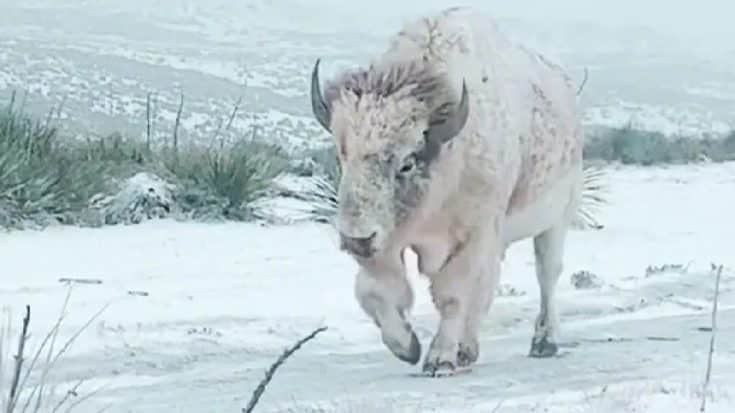 TikTok user jesus_86 recently posted a viral video of a white bison slowly walking down a snowy road, and it is truly a sight to behold. The original video has amassed nearly 2.5 million views, captivating audiences with the rarity of the animal.

Bison are typically brown with black skin, but approximately one out of every 10 million are born with a rare condition known as albinism or leucism, which causes them to be white.

Legend has it, white bison hold a special significance in many Native American religions, particularly for the Lakota people. According to their tradition, a White Buffalo Calf Woman appeared to two male scouts in a time of famine.

One of the men was filled with lust for her and was reduced to a pile of bones when he approached her, while the other was spared and sent back to his tribe with instructions to prepare them for her arrival.

The White Buffalo Calf Woman then taught the tribe the 7 Sacred Ceremonies to protect Mother Earth and gave them the čhaŋnúŋpa, a sacred pipe that is still passed down through the generations to this day.

For the Lakota, the white bison symbolizes a powerful spiritual presence and a reminder of the importance of protecting the earth.