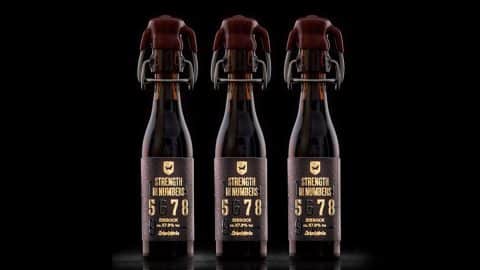 Two rival breweries have teamed up to create the one thing they’ve both fought over for years – the world’s strongest beer.

The Scottish brewery called Brew Dog and German brewery, Schorschbrau, have been going at it for a while now to see who can hold the title for creating a beer with the highest ABV. Back in 2009, when Brew Dog was just 2 years old, they released a 32-percent ABV beer called Tactical Nuclear Penguin, specifically created to swipe the world’s strongest beer title from Shorschbrau’s 31-percent ABV, Schorschbrau Schorschbock.

Things didn’t stop there. The Germans created a 40-percent ABV retort which led to the Scotts releasing the 41-percent ABV, Sink the Bismarck the next year. Schorschbrau then beefed up its Schorschbock to 43-percent ABV, which led BrewDog to release what could be considered the craziest beer ever. They made a 55-percent ABV beer called End of History. Each bottle came inside a taxidermy squirrel.

I am not sure what Google search led me to this and it's certainly old news, but here you go… “You'd expect a lot from a bottle of beer costing $765. What you get is 55 percent alcohol — and served in a squirrel. ” https://t.co/ju5WyFoamL pic.twitter.com/gP0xQcAvTJ

In 2011, Schorschbrau rallied for one final hail Mary and came up with a 57-percent Schorschbock – a move that finally brought BrewDog’s squirrels to their knees.

57.8 abv , 40ml bottle of the strongest beer in the world 🍻 @BrewDog pic.twitter.com/YXQUUVFPk7

Since then the two brewers decided to engage in a collaboration—creating a new candidate for the “world’s strongest beer” title together, called Strength In Numbers. Brew Dog wrote on their website,

“Strength in Numbers is a 57.8-percent beer that reaches its colossal ABV through the traditional eisbock method, which means freezing the beer and removing chunks of ice (water) so that you’re left with the concentrated high ABV liquid. The beer also features a blend of BrewDog’s own Death or Glory, an ice distilled Belgian golden ale that’s been sitting in whisky casks for 10 years. The result is unlike anything you’ve had before or are likely to have again.”

Most beers with a high alcohol content are fortified with another liquor so they’re technically not considered a beer.

This sold out pretty fast.

We launched the strongest beer in the world today. And then it sold out.

Hope you enjoy it if you managed to get your paws on some. pic.twitter.com/sKIUp3yuZM

Unfortunately for anyone wanting to try it, the Strength in Numbers was sold out the day that it got released. If you’re still curious about how it tastes, watch the video below for an in-depth review.