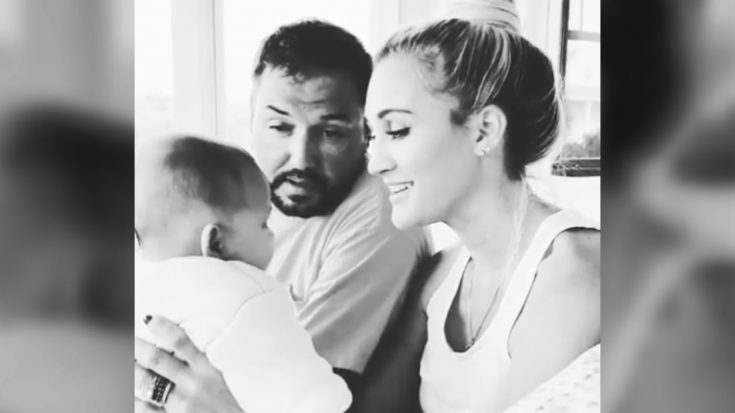 Y’all may not have known this, but Jason Aldean isn’t the only musical one in his family. His wife, Brittany, is also a singer!

In fact, before Jason and Brittany met, Brittany was a contestant on American Idol. She got two “yes” votes during her audition, which allowed her to earn a golden ticket to Hollywood.

But Brittany was eliminated in the following week of the competition, which is why many people likely forgot or simply didn’t know that she was once on the show.

Brittany has showcased her hidden singing talent from time to time, typically in the form of lullabies. Back when her and Jason’s son Memphis was just a little guy, she shared a video of her singing “You Are My Sunshine” to him.

Now that Jason and Brittany have a baby girl, even more lullabies are being sung in the Aldean house!

In an adorable video that Jason shared on Instagram, he and Brittany can be seen joining together in a sweet “My Girl” duet as they try to get their daughter Navy to sleep.

It’s a rare thing to see Brittany singing, and it’s even more rare to see her sing with Jason!

It seems that little Miss Navy was enjoying her parents’ serenade, but there’s no telling if it actually got her to sleep through the night. Jason was at least hopeful it would, including a hashtag on his post that read “#pleasesleepallnight.”

We don’t know about Navy, but Jason and Brittany’s sweet lullaby sure soothed us! You can check out their adorable duet below.