By Jennifer Pernicano on January 23, 2020
Advertisement 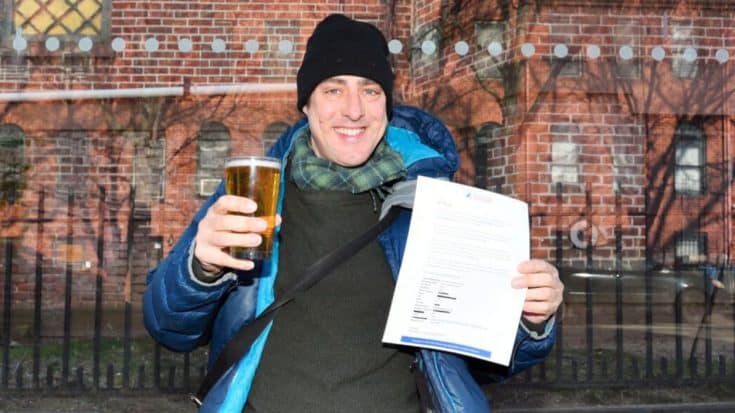 More and more, you probably see people go into places with animals when there is clearly a sign that says they are not allowed. These people get around that rule by registering their pets as emotional support animals.

While Hayes doesn’t have an animal he leans on for emotional support, it seems he leans on something else – beer. And he’s taking action to make it legal for him to carry and drink it on public transportation.

“I travel from upstate to Brooklyn a lot, and on the bus they say it’s a federal crime to smoke or have an alcoholic beverage unless by prior written contest, and I always wondered where you get that consent,” he told Brooklyn Paper.

He did some digging and ended up registering a pint of beer as his emotional support dog with USA Service Dog Registration. He even has a registration code for his beer.

Hayes told Brooklyn Paper, “I don’t mean it in a heady mental health manner. More if you go to a party, and want to break the ice.” He added that he’s “not trying to make light on anybody who has any emotional issues,” but just wanted to see if it would work.

An employee at USA Service Dog registration told Brooklyn Paper that while Hayes does have a registration code for his beer, it won’t help him.

Despite what the employee said, he told The New York Post that he waited for the bus in Brooklyn with a glass of beer in his hand on January 20.

“I was not approached by any law enforcement,” he said.

The Government is thinking about tightening up rules for emotional support animals (ESA) on flights… Where do we draw the line? #beer? ? #TODAYinAZ @RyanThomasCody pic.twitter.com/6pFh0MmAYQ