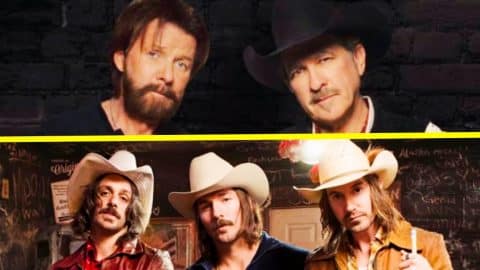 After much anticipation, Brooks & Dunn‘s Reboot album arrived in 2019. The duo’s first album since 2007, Reboot has members Kix Brooks and Ronnie Dunn reimagining some of their biggest hits with a little help from modern country’s brightest stars.

Fans weren’t left hanging after the duo announced the album’s release. They debuted a few of its tracks in advance, including a rowdy rendition of “Brand New Man” featuring country powerhouse Luke Combs.

But fans had to wait until the album’s release date in order to listen to the record in full. That day finally came, and Brooks & Dunn graciously shared the audio to all of the album’s tracks on their official YouTube page.

Putting The “Boot Scoot” In Reboot

One song that was finally released along with the album was an updated rendition of “Boot Scootin’ Boogie.” Released in 1992, “Boot Scootin’ Boogie” was a number one hit for Brooks & Dunn. Its popularity led to a revived interest in line dancing, and started a craze that lasted for years.

Now known as one of their signature songs, it only made sense for Brooks & Dunn to update “Boot Scootin’ Boogie” for Reboot. They enlisted the help of hit country trio Midland for the new version, and they bring their A-game.

Although Midland is fairly new in the country music space, you likely know them thanks to their hit single “Drinkin’ Problem.” Another one of their singles is called “Mr. Lonely,” and coincidentally enough, the music video features line dancing.

A Song To Get You Grooving

Between that video and their work with Brooks & Dunn on the updated “Boot Scootin’ Boogie,” Midland may be able to bring back the line dance craze yet again!

The new version of “Boot Scoogie Boogie” is definitely something y’all will want to groove to. The updated rendition takes on a somewhat jazzy feel, with the sounds of piano defining the instrumentals.

Midland’s naturally more traditional-leaning sound is also perfect for the track and for working with Brooks & Dunn. Everything feels smooth and natural, which is what makes this new rendition of “Boot Scootin’ Boogie” so enjoyable.

You can go ahead and hear the updated rendition of the tune by checking out the audio clip below. You’ll only be able to get a few seconds into it before you feel the itch to start dancing!