By Miranda Raye on March 22, 2019
Advertisement 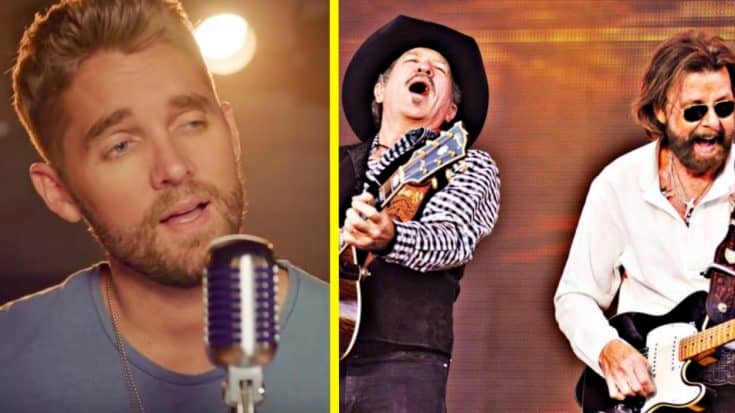 When it comes to country music duos, there’s no arguing that Brooks & Dunn is one of the best. In case you needed an official confirmation to prove it, just consider the fact that they were just inducted into the Country Music Hall of Fame in 2019.

Brooks & Dunn’s induction into the HOF fell at the perfect time in the duo’s career. They’re experiencing quite the revival right now, thanks in large part to their 2019 album, Reboot.

The album features reimagined versions of the pair’s biggest hits, with each updated recording featuring vocals from a modern star. For example, superstar singer Luke Combs joins the duo on their hit “Brand New Man.”

That song was released prior to the album’s debut.

The duo has another reimagined song for us to hear, and it features modern country hitmaker and heartthrob Brett Young.

Known for songs such as “In Case You Didn’t Know” and “Mercy,” Young seemed like the ideal pick to take one of Brooks & Dunn’s sexiest tracks and make it even hotter.

Of course, the song we’re talking about is the duo’s 2001 single “Ain’t Nothing ’bout You.” Featuring Dunn on lead vocals, the sizzling song has the country crooner praising his lady love, saying how everything about her looks and personality drives him wild.

A New Rendition To Enjoy

If you thought the original song was steamy, just wait until you hear the Reboot version. The song is now a certified sexy slow jam, opening with Young on lead vocals.

Young’s smooth voice fits the new arrangement perfectly. It also blends well with Dunn’s voice once he jumps into the song a little later on.

There’s no denying that the new version of “Ain’t Nothin’ ’bout You” is sure to make a few listeners feel weak in the knees. Go ahead and give it a listen in the clip below.

When you finish, be sure to let us know what you think of the reimagined song!