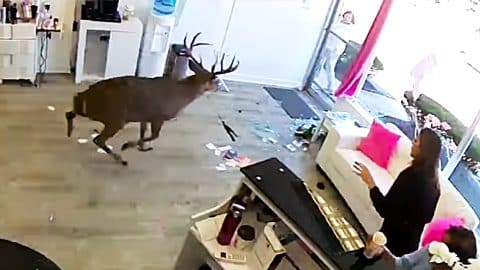 Around 12:30 pm on Saturday afternoon a full-grown male buck was caught on camera running at full speed and crashing through the window of the Be.you.tiful Hair Salon.

Everyone’s In Shock At What Just Happened

It happened in Lake Ronkonkoma, New York and the moment was captured by the salon’s security camera. As the video starts, it appears to be a typical day at a salon with a guy sitting in the barber’s chair getting a haircut and a lady sitting waiting for her turn.

Then all of a sudden, out of nowhere, a deer comes running full throttle towards the establishment and jumps at the window. The deer’s powerful momentum shatters the window instantly and he comes blazing through.

“I just started screaming. I didn’t even know how to react,” store owner Jenisse Heredia said. “It’s crazy because there was really no damage inside. It just slammed into some things.”

What Happens When The Deer Gets Inside

The deer jumps directly onto the lady waiting, stepping on her legs and hitting her head knocking her over. He storms past her and she quickly gets up stunned at what just happened. Meanwhile, the barber lady screams and the guy getting a haircut jumps out of his chair.

With everyone in a panic, the buck continues to run around the salon until he realizes the only way out is the way he came in. He turns around and heads for the front where he uses his antlers to headbutt the glass door open and run back onto the street.

Everyone still in shock walks around holding their heads confused at the situation that just unfolded. According to the police, the lady sitting on the couch was taken to Stony Brook University Hospital suffering leg and head pain but no life-threatening injuries.