By Megan Dinsdale on August 5, 2022
Advertisement 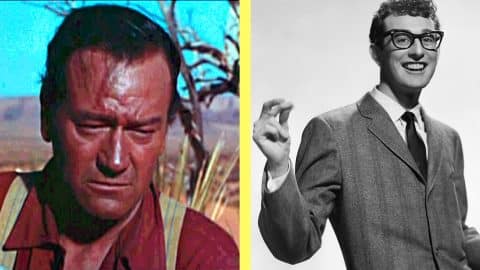 Buddy Holly fans love the classic hit “That’ll Be the Day,” but few know that the killer song was actually inspired by Western icon John Wayne. Buddy Holly’s band, The Crickets, performed the song to rave reviews—and it’s likely that they always remembered Wayne’s movie each time they sang the lyrics.

“That’ll Be the Day” was inspired by John Wayne’s film The Searchers. In the film, John Wayne says, “That’ll be the day.” Buddy Holly and Jerry Allison, another member of The Crickets, saw the film together. Holly joked about writing a song together, and Allison replied, “That’ll be the day!”

While the song’s catchy tune is beloved by audiences around the world today, it wasn’t first received with critical acclaim. Holly got a Nashville record deal, and sadly, his music producer was strictly country—he didn’t understand rock music.

Thankfully, another producer felt differently, and the song was recorded in New Mexico. The song hit the number one spot on the Billboard Top 100 in both the United States and the United Kingdom.

Buddy Holly and The Crickets fans around the world are thankful that Holly kept pressing forward—no classic rock fan wants to imagine a world without “That’ll Be the Day.”