Bull Elk Rolls Downhill Towards Cameraman After Bowhunter Shoots It

By Manly Bryant on September 23, 2022
Advertisement 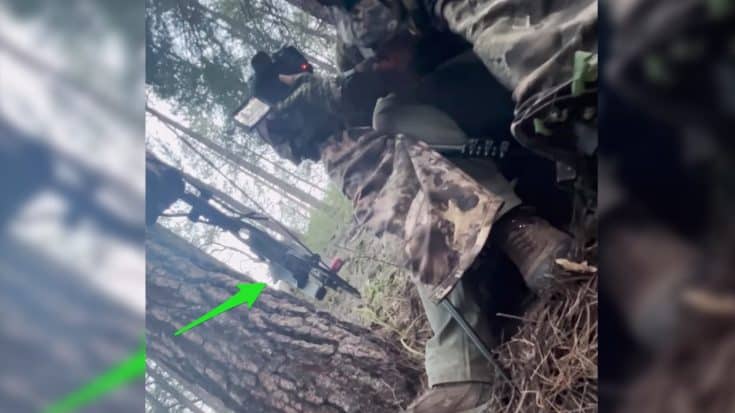 Professional bowhunter and host of the TV show Heartland Bowhunter, Shawn Luchtel, was bowhunting in New Mexico when he shot a massive bull elk and it rolled down a hill towards him, causing him and his cameraman to have to get up and get out the way of the 700-pound animal.

“Chandler, get up! Get up! Get up!” you can hear Shawn saying to the cameraman as the bull rolled toward him in an Instagram video.

The heart-pounding moment was captured on video from a camera attached to Shawn’s head. The video starts off with Shawn pulling his arrow back on his bow as the big bull elk run up a hill into the camera frame.

Within seconds, Shawn finds his shot and lets the arrow fly about 13 yards away from the elk and it hits the animal with precision. The big beast takes a few more steps before falling to the ground and rolling downhill toward the hunters.

Shawn tells his cameraman to get out of the way as it rolls towards them, but luckily, a tree standing between them stops the animal from rolling. Shawn takes his camera and shows the viewers as he walks exactly eight steps to where the elk was laying on the ground.

Shawn noted that he specifically traveled to New Mexico with the intention of tagging a big bull elk and filming a full episode for his TV show. Judging by the footage they captured, he and his crew Hunters New Mexico, an outfitter based in Albuquerque, were successful with getting the video they were hoping for.

“That morning was the very first day of the hunt, and it was action-packed,” Shawn told Outdoor Life. “We called in a couple smaller bulls and passed on them, and our plan was to hunt a waterhole nearby.”

They checked their trail camera photos which showed multiple good bulls coming to the watering hole to get a drink so they decided to set up near it. They heard bugles all afternoon and a little over 5 hours into the hunt, they watch a small bull elk come to the waterhole.

The small bull drank for a while but all of a sudden, got out of the water and trotted off like he was spooked or something. The crew then watched the small bull chase a cow out of the trees and after that, a much bigger bull elk showed up.

The two bulls started sprinting up the hill very close to the hunters and Shawn said he knew that this was his chance to do what he came to do, so he drew back his arrow and watched for a good visual.

“This bull comes flying out of the brush, cuts off the small bull, and that’s when I was at full draw,” Shawn told Outdoor Life. “I was trying to stop him, but he had no idea we were there. He just happened to stop right in my window and bugle from 13 yards. I ended up making a great shot. He trotted 10 about yards, stopped, looked around, fell over and rolled right down to us basically.”

Watch The Hunting Footage In The Video Below