By Manly Bryant on February 16, 2022
Advertisement 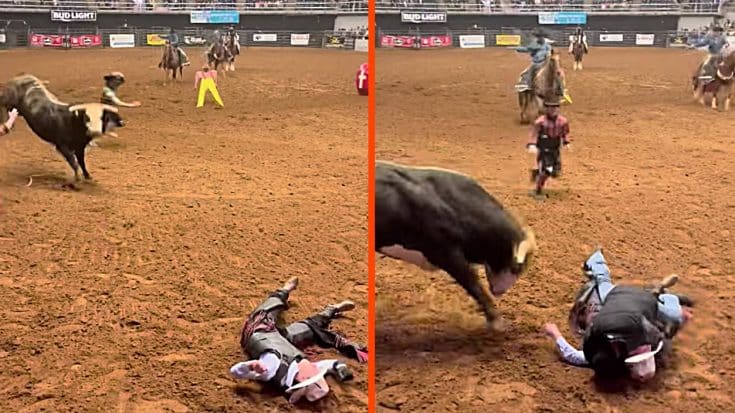 What an incredible moment to witness – a father, laying his own life down on the line to save his son from getting trampled by a rampaging bull after the young man had been bucked off the bull’s back.

The heroic moment was captured on video at a packed rodeo stadium located in the beautiful state of central Texas.

One of the onlookers attending the event, Lucas Hay, was recording his good buddy, Cody Hooks, who was geared up and ready to go out into the arena.

Lucas was sitting on the back of a monstrous muscled-up angry bull locked up in the bucking chutes that, once released, the bull would be bucking every which way to get the cowboy off its back.

Well, that’s exactly what happened! Once those chutes gates opened, the bull took off out of there trying to buck Cody off its back.

Cody lasted about two seconds before getting flung eight feet high and then landing directly on his back. The impact of smacking the ground that hard and from that high, completely knocked him out cold.

His body went stiff and the bull bucked around the arena as the rodeo clowns jumped in and tried to do their best to distract the bull.

Cody’s brave father, Landis Hooks, jumped down into the arena and dropped down to his knees beside his boy to check on him while keeping a protective eye on the rampaging bull.

Unfortunately, the bull locked its sights on the two and started heading right for them. At this heart-pounding moment, Cody’s father laid his own body over his unconscious boy’s body before the bull got right on them and gave them both another powerful headbutt.

Landis stayed laying over top of Cody and takes the majority of the hit from the bull before the animal goes stomping off into the other direction of the arena.

The video is only 20 seconds long in total and cuts off shortly after headbutting the two men. Lucas Hay’s shared the video to Facebook and it was picked up by another outlet Slap Dicks Cattle Co and one of Cody’s family members, Heather Hooks, posted an update on how he is doing. See a screenshot of her comment below!

Watch The Heroic Video Below