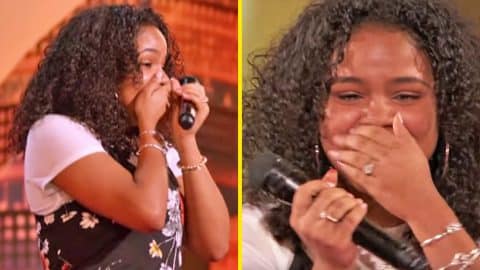 15-year-old Amanda Mena stepped on the iconic America’s Got Talent stage to face the thousands of fans in the audience, as well as judges Howie Mandell, Mel B, Heidi Klum, and Simon Cowell.

We've set the table for talent. Are you ready to be amazed? 🤩 #AGT

Looking a little timid, Howie and Simon asked her a few questions about the talent she would be showcasing for them.

When Howie asked her if music is just a hobby, or something that makes her feel good, she responded by saying, “I feel like my experiences really connect me to music. I just…I love it.”

Amanda revealed that she was born in the Dominican Republic and when she was four years old, she moved to the United States, but didn’t know any English. She also emotionally revealed that she has been bullied quite a bit, but that, along with the help of music has given her a tough skin.

When it came time for the music to start, she stood behind the microphone stand and prepared herself for probably the biggest moment in her life thus far. After singing just a few lyrics to Aretha Franklin’s “Natural Woman,” the crowd went wild and the judges looked pleasantly surprised, especially Mel B.

Amanda powered through the song, making the difficult runs and powerful high notes seem so easy and…well…natural. Upon singing her final note, she received a well-deserved standing ovation from the audience and three of the four judges.

Heidi admitted she was “blown away” by her voice, while Howie said she has “natural talent” and Simon saying he could feel her “genuinely natural soul.” Mel B couldn’t stop raving about Amanda’s performance and knew she had to do one thing – press the golden buzzer, which sent Amanda straight to the live shows!

Thank you God! Thank you to my family! And thank you @officialmelb so much for making me your golden buzzer! You’re such an inspirational soul, I can’t wait to learn from you! I feel so blessed and grateful. Love y’all

The teenager looked so shocked and burst into tears as gold confetti rained down on her! Congratulations, Amanda! We’ll see you during the live round! Watch her golden-buzzer worthy performance in the video below.