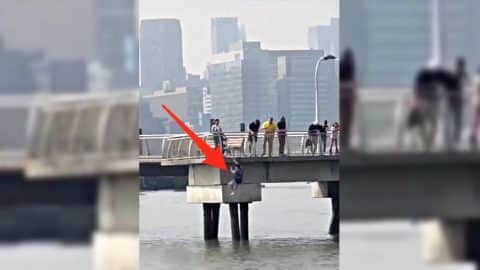 Harper, an adopted dog from North Shore Animal League, is the topic of discussion right now. She was adopted by, Erin O’Donnell, a dancer at the Brooklyn Irish Dance Company who quickly fell in love with her. Because of Harper’s background though, Erin said her new pup gets a bit anxious when meeting new people but after spending some time with her she becomes more friendly.

Erin was at work one day and Harper was being walked by her dog walker when a careless cab driver ran a stop sign, hitting both Harper and her dog walker. Fortunately, they didn’t get injured badly but the situation scared Harper so much she ran off in a panic. Witnesses watching said she ran straight to the East River and jumped right into the water.

yesterday i was at the Brooklyn Barge and a dog ended up in the river, here’s my account: pic.twitter.com/ym9Tn57uyE

Still super scared, Harper started swimming out away from the shore. The water was cold, even though it was sunny out. One bystander, Gabe Castellanos, was watching and didn’t realize what was going on. He thought Harper was just cooling off from the heat of the sun.

“I was at the Brooklyn Barge celebrating my Bday when we saw a dog ‘going for a swim,’” Gabe Castellanos said. “The day grew hot and we all figured a nice swim could do us all a service. We assumed the owner was on shore keeping a watchful eye until a patron ran up to the north side of the Barge with a panicked voice saying that the dog, Harper, had run away.”

At this point, everyone watching knew Harper was about to drown because she started slowing down and sinking more. That’s when Castellanos decided to do something about it. He was a trained water survivalist at SUNY Maritime College and quickly grabbed a life jacket on the barge.

“Since there was no sign of her making an attempt to swim back to shore, I knew something had to be done,” Castellanos said. “I looked on the barge for any type of floating device to use if I were to jump from the end, but then I noticed there was a life vest, so I grabbed it.”

He Jumps To Save The Dog

With 300 people now watching the situation unfold, Castellanos walks out to the edge of the barge and jumps in as close as he can to Harper. Everyone erupts into cheers and clapping. Castellanos said after he jumped in he started focusing on his breathing because the water was extremely cold. He knew Harper wouldn’t last long and started making his way towards her.

When Castellanos got close to Harper she was very scared and tried to swim away from him. He didn’t give up on her and persistently kept swimming towards her. He eventually caught up to her and Harper in a panic tried to bite him. However, he stayed calm and gently grabbed her and started leading her towards the shore.

Everyone applauded Castellanos as he got her to dry land and the story ended with everyone making it home safely with no major injuries. The dog’s owner, Erin, was very grateful to hear that Harper was ok and honored that Castellanos was there to save her.

“Her paws are in rough shape, so she will need some trendy boots for a few weeks, but otherwise she’s in great spirits,” Erin said. “It is definitely so refreshing to see the positive responses from people at the Brooklyn Barge and on social media expressing their sympathy for Harper and praising Gabe, who definitely saved the day.”

The incredible story hit the internet like wildfire. Gabe Castellanos didn’t have to do what he did but because he took the leap of faith, he became an instant internet hero.