By Manly Bryant on January 24, 2019
Advertisement 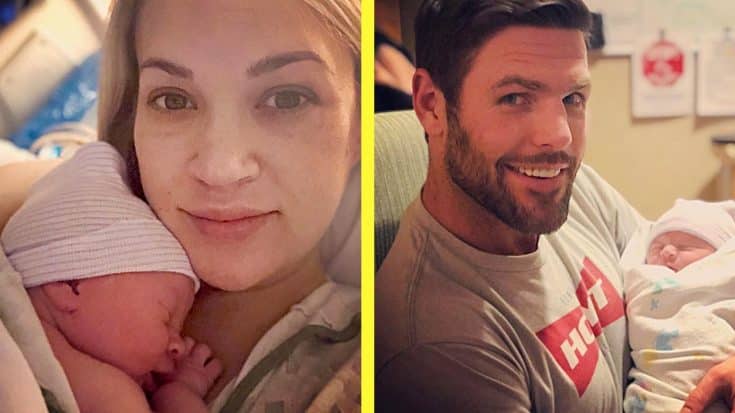 Following the breaking news that Carrie Underwood had given birth to her second child, both she and husband Mike Fisher began sharing some adorable photos and stories of love on social media for their fans to enjoy.

Underwood and Fisher, who wed in 2010, welcomed their first son, Isaiah, in February 2015 and now – nearly four years later he has a baby brother!

The Fisher / Underwood’s love for their first child is immense and as he’s grown up, they’ve shown some of the best and brightest moments he’s had so far – and many cute, candid times in between.

Now that little Izzy has a brand-new brother, it’s no surprise that these two amazing parents have started by showing exactly how he reacted to the arrival of his new partner in crime!

This is what my kid has been playing with for the past 2 days. Yes, it’s a potato. Yes, he has other real toys. Yes, I know it’s weird.

Throughout the last couple of years, they have grappled with some seriously hard times as Carrie suffered several miscarriages before her pregnancy with Jacob.

As part of her announcement revealing that she and Mike and Isaiah had welcomed little Jacob into the world, both Underwood and Fisher posted some beautiful and candid photos to social media of their new bundle of joy – and even shared Isaiah’s reaction they captured perfectly!

Jacob Bryan Fisher! You are a gift from our Lord! The last few years has has had its challenges and it makes this moment even more sweet! We didn’t know if Izzy would ever have another sibling but we learned through it all that God is in control and his timing is perfect! He is good all the time even in the difficult times that are hard to understand. #grateful #miraclebaby

Perched over his sons to help young Isaiah hold Jacob, Mike leans in with a smile and a reassuring arm as Isaiah gently holds Jacob in his arms for the very first time. The look on his face is pure love and amazement at this new pal he’ll have forever!

Check out the picture-perfect moment below!