By Manly Bryant on September 11, 2019
Advertisement 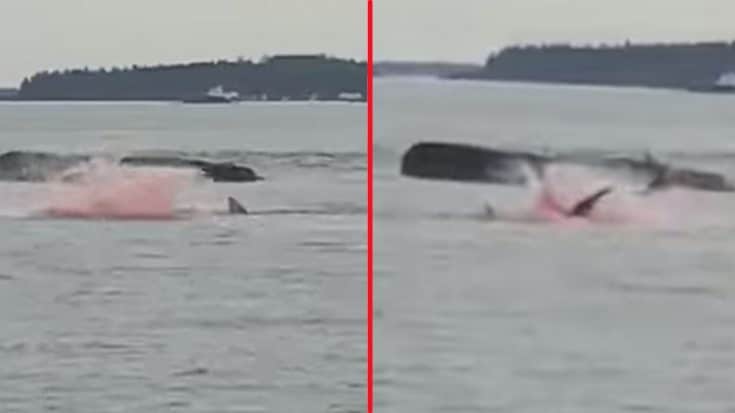 Tourists are out enjoying a beautiful day off the coast of Green’s Point Lighthouse in Brunswick, Canada when they witnessed what appears to be a bloody frenzy shark attack near their boat.

Captain Theophilos pulled out his camera and records the video you’re about to see and you can hear his frightened passengers scream in horror as they watch a great white shark shred to pieces what they think is a seal.

They’re riding on the Jolly Breeze Tall Jet Boat when it happened and at first, not much can be seen. Then all of a sudden you hear loud splashes and a massive fin comes popping out of the water, thrashing around.

The water immediately turns blood red. Apparently the tourist saw seals swimming in the water earlier before the attack so they can only imagine that one of them swam into the ocean’s most feared predator.

“Oh my god! Where’s my phone, take a video of it” one woman screams to the captain and he reponds to her saying, “I’m videoing, I’m trying to drive.” Another lady chimes in saying, “We scared those poor seals, I even said don’t get eaten.”

The video was posted to Facebook September 10th and has already been viewed more than 31 thousand times. The comments are spectacular to read, with many saying what a cool video while others are sad for the seals. Some of the comments are actually from people who were on the boat and they seemed to really enjoy their time.

As sad as it may be to see the seal get eaten by a shark it is mother nature and sharks have to eat too. You can watch the video below to witness what the tourist saw.