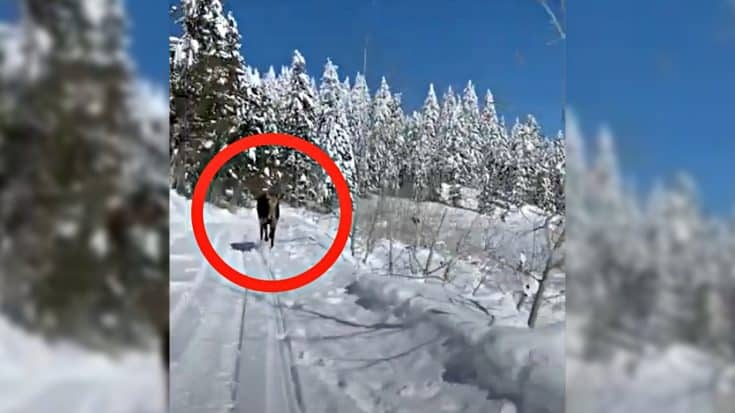 Snowmobilers in West Yellowstone expected to see the sights of the snow-covered landscape, but they got more than they bargained for on one fateful day in Montana.

Tour guide Justin Appleby took tourists along his normal route, showing them the beauty of West Yellowstone, when they were joined by a dangerous visitor.

A moose began to trail the snowmobile, at first running slowly toward the tourists. Moments later, the moose begins to pick up speed considerably, gaining ground while following the tracks of the snowmobile. To add fuel to the fire, another moose comes out of the forest, joining the first in its pursuit of the snowmobile.

In the video, a scared passenger can be heard screaming, “Go, go, go!” as the driver picks up speed to make their way to safety

Appleby said, “It was crazy, he was going slowly at first so it seemed OK, but then he sped up so we hit the gas and got out of there.”

Luckily, the driver was able to pick up enough speed to get away from the pair of moose. A moose can run up to 35 miles per hour, and can weigh up to 1,200 pounds – two of them would be no match for a group of humans on a snowmobile tour.