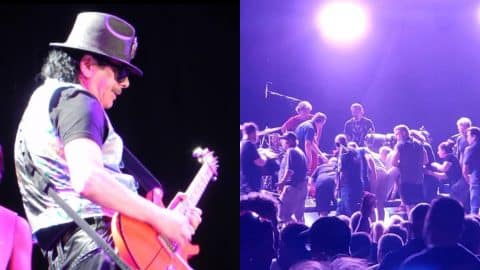 Santana was performing at the Pine Knob Music Theater on the outskirts of Detroit when he collapsed on stage. Concertgoers report that the musician was about an hour into his concert and had just begun performing “Joy,” a song he enlisted country singer Chris Stapleton to record with him for his latest album, Blessings and Miracles. The musician appeared to know something was wrong and sat down in front of the drums, then collapsed backward.

#BREAKING: Carlos Santana just passed out on stage at ⁦@PineKnobMusic⁩. Medical personnel on stage. Crowd asked to pray for him because of a “serious medical” issue. Pic via ⁦@LoriPinsonFOX2⁩ pic.twitter.com/6VqHkBwVIT

As EMS and staffers came to his aid, a black curtain was draped around the 74-year-old in order to grant him privacy as he was being treated. It’s unclear how long personnel worked on the musician before he was carried off stage, but he was filmed waving to the crowd from behind the curtain as he was wheeled off stage.

Carlos Santana waved to clapping fans as he’s helped off the stage pic.twitter.com/YA55N4QCZe

The cause of Santana’s collapse is unclear, but he was reportedly taken to a local hospital for evaluation.

Footage captured by fans in attendance show the moment Santana took a seat in front of the drum set. Another clip shows EMS rushing to the stage to help the musician.

At @pineknob #carlossantana having to sit down on the stage right before they stopped the show. Glad he seems ok now pic.twitter.com/6tcAo4i0wQ

Carlos Santana rose to fame nearly six decades ago and became one of the best guitarists of all times. He has 10 Grammy Awards to his credit and is a member of the Rock and Roll Hall of Fame.

We wish Carlos Santana a full and speedy recovery.