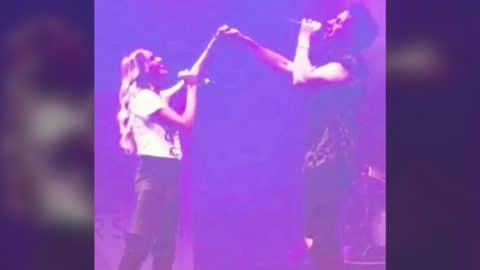 For Carly Pearce and Russell Dickerson, the past few years have been like living in a dream. A really, really good dream.

Pearce released her debut album Every Little Thing in October 2017, and its title track was a number one hit on the Country Airplay chart. Its success catapulted her into the spotlight, earning her spots on tours with the likes of Luke Bryan and Rascal Flatts.

The single’s accompanying music video also led to Pearce’s first-ever award win, as it earned the trophy for Breakthrough Video of the Year at the 2018 CMT Music Awards.

As for Dickerson, the past few years have been just as good to him as they were to Pearce. His debut album Yours was also released in 2017, the exact same day that Pearce dropped her record.

That album’s lead single was also a number one hit on the Country Airplay chart, as was its followup “Blue Tacoma.” His continued success led to him snagging a spot as an opener for Thomas Rhett‘s 2019 Very Hot Summer Tour.

These Two Go “Way Back”

But before Dickerson took off on that tour, he had one of his own to headline. Or that is, co-headline, along with none other than his good friend and fellow successful star, Pearce.

The duo announced the big news in early November 2018, revealing that they’d be touring to nearly a dozen cities in early 2019. Their tour, called The Way Back Tour, references how the two of them met years ago when things weren’t so bright on the horizon.

“I met @russelld 8 years ago when we both played at a Nashville club trying to get noticed by music industry executives, ” Pearce wrote. “Our paths have paralleled in so many ways, with all the ups and downs that have led to us experiencing success at the same time.”

The duo gave fans a little taste of what to expect on their co-headlining tour when they were randomly booked to perform at the same venue on the same night in 2018.

Not wanting to pass up the perfect moment, they decided to sing a duet together, and chose Shania Twain‘s “You’re Still the One” as their song.

While the song is definitely romantic in nature, Pearce explained that she didn’t view it that way when she was singing it with her close friend.

Alongside a short video of her duet with Dickerson, Pearce explained just how much it meant to her to sing that song with him. She confessed that she found herself tearing up by the end of their performance, all because of the final line in the song.

Indeed they did! You can watch the two friends’ emotional duet by tuning in to the clip below.

Congratulations to Pearce and Dickerson on all they’ve accomplished so far. Can’t wait to see what they’re able to achieve together on their co-headlining tour!