Caroline Bryan Falls Down While Running Behind Golf Cart

By Jennifer Pernicano on May 4, 2020
Advertisement 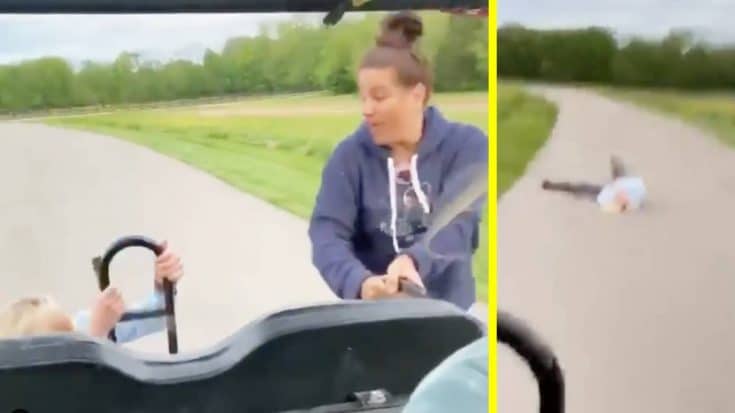 If you are in need of a laugh during these uncertain times, look no further than Caroline Bryan’s Instagram.

Caroline has been married to country singer Luke Bryan for almost 14 years, but she has been making a name for herself on social media with her hilarious posts. Luke and Caroline enjoy pranking anyone and everyone, but their best work comes when they are going after their favorite victims: each other.

During the quarantine in April, Caroline went for what she thought would be a “peaceful [bike] ride during quarantine season.”

In a video posted to her own Instagram page, Luke is driving his truck closely behind Caroline on her bicycle. He can be heard saying, “She’s about to get train-horned and she doesn’t know it!”

Bryan then honked his horn – which sounded like an actual train – and as planned, it scared the living daylights out of his wife! So much so that she fell off her bicycle. Caroline tried to save herself by veering onto the grass, but that only made things worse. Don’t worry, Luke stopped to ask if she was okay! Her response? Flipping him off.

Luke is a butthole. Just trying to have a peaceful ride during quarantine season.

Caroline plotted her revenge and found the right prank that would suffice. She had her nephew, Til, help her climb into the large cupboard above the refrigerator. Luke was told that parmesan cheese was needed for the meal they were about to eat, so he was forced to look in the fridge. At the perfect moment, Caroline screamed to scare him, but we bet she didn’t think it’d go this well!

Luke was holding a beer and when he got scared he threw the beer in the air and ran away! He knew his wife got him good, so he said, “Dang it!”

Caroline then told him, “Payback’s a b**ch!”

Got Luke back….? “Somebody messes with me, I’m gonna mess with him”- Al Capone @ethanhelms ?

While the next video Caroline shared with her followers wasn’t a prank, it garnered just as many laughs.

She shared a video of her and her friend holding onto a golf cart while running behind it. It looks as though she tried to jump on the back of the cart, but instead, she fell down! The driver stopped immediately and the friend she was pushing the cart with ran to help her. In the comments section, she mentioned she was okay, just that her pants were now ruined.

“This is why I have so many scars and bruises. Never been graceful. At all,” she captioned the video, which was perfectly dubbed with the hip-hop song “Don’t Drop That Thun Thun.”

We’re glad she’s okay and can laugh at herself after something like this happens, too! Watch the hilarious video below.

This is why I have so many scars and bruises. Never been graceful. At all. ? ? @ethanhelms