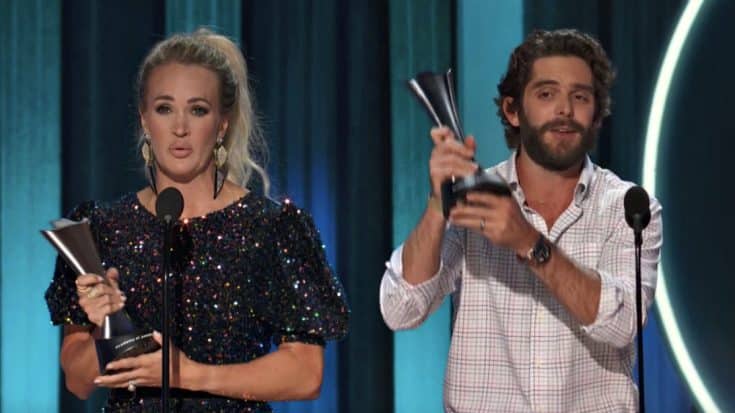 It was a historic night at the 55th Academy of Country Music Awards. For the first time, the event was held in Nashville after relocating from Las Vegas. And, the show was broadcast from three different iconic Music City locations: the Grand Ole Opry, the Ryman Auditorium and the Bluebird Cafe.

After a memorable night filled with surprise winner announcements, song collaborations and two dozen performances from some of country music’s biggest stars, the night’s biggest award was announced by the night’s host, Keith Urban. And, in following with the pattern of an already crazy year, two artists tied for the honor.

For the third time in her career, Carrie Underwood was named the ACMs Entertainer of the Year, making her the most awarded woman in that category in ACM Awards history. She won in 2008 and 2009.

Underwood’s early wins were followed by back-to-back titles for Taylor Swift in 2011-2012, which makes them the only women ever to win that coveted trophy more than once. Underwood’s 2020 win makes her the only woman with three Entertainer of the Year titles.

Underwood will be sharing 2020 Entertainer of the Year honors with Thomas Rhett. The win was Thomas Rhett’s second of the event, having earlier been named the winner of the Video of the Year trophy for “Remember You Young.”

The Entertainer of the Year award “is given to the entertainer who displays the greatest competence in all aspects of the field. Voters give consideration not only to recorded performances but also to in-person performances, staging, public acceptance, attitude, and leadership. The artist’s overall contribution to the country music image is considered as well.”

Congratulations to Carrie Underwood and Thomas Rhett on their historic win!

Posted by ACM – Academy of Country Music on Wednesday, September 16, 2020

Carrie Underwood brought the house down with her showstopping #ACMawards performance! Turn on CBS now and don't miss any more of the show!

Posted by ACM – Academy of Country Music on Wednesday, September 16, 2020