Carrie Underwood Facing Huge Dilemma – Here’s How You Can Help

By Miranda Raye on April 25, 2019
Advertisement 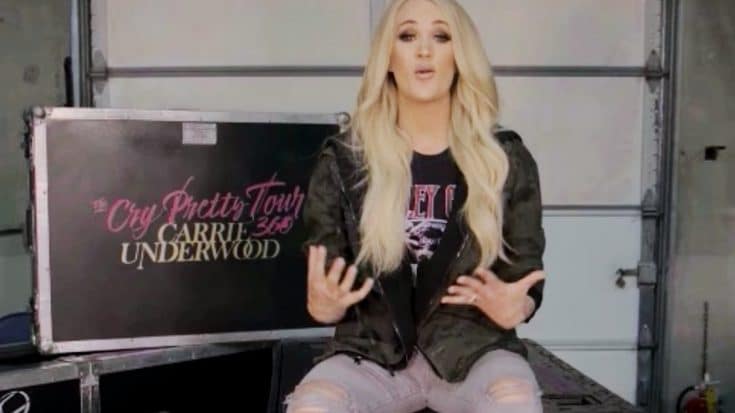 Country fans love their duets, and the numbers prove it. Some of the genre’s all-time greatest songs are duets, such as Conway Twitty and Loretta Lynn‘s “Louisiana Woman, Mississippi Man” and “Jackson” by Johnny Cash and June Carter.

Another one of country music’s beloved duets is “Remind Me,” which was recorded by Brad Paisley and Carrie Underwood. Over the years Underwood has recorded duets with many other artists, including Keith Urban and Miranda Lambert.

More recently, Underwood reached outside the country music bubble to find a collaborator for her inspiring track “The Champion.” The song was used as a theme for Super Bowl LII and the 2018 Winter Olympics, which gave it a wealth of exposure.

While not technically a country song, “The Champion” still peaked at the 57th spot on the Country Airplay chart. It went on to be certified platinum and its CMT Music Award-winning music video has generated well over 49 million views.

Underwood’s duet partner on the track was the rapper Ludacris, who is also credited as a songwriter. Despite the song’s immense popularity, he and Underwood have only gotten together once to perform it live.

That performance took place at the Radio Disney Music Awards in the summer of 2018. The crowd went wild when Ludacris walked out on stage!

Now, Underwood is gearing up for the start of her Cry Pretty Tour in May, but she’s facing a bit of a dilemma. She obviously can’t bring Ludacris along to every tour stop, so if she wants to perform “The Champion,” she needs a new duet partner.

Carrie Needs Your Help With This

Underwood took to social media to announce she is in search of someone who can replace Ludacris by her side on stage and perform the rap in “The Champion.” But rather than enlist another singer or rapper, she wants fans like you to be her new duet partners!

“If you think you have what it takes to get on stage with me and perform for your inspiration, and you know the entire rap to ‘The Champion,’ then submit your video now!” Carrie encouraged in a video message she shared with her fans

How about I sing and you do the rap on #TheChampion with me live on the #CryPrettyTour360? Let’s honor your inspirations together in a city near you! Details: https://t.co/7l66Nw6GZ9 pic.twitter.com/yqejN5WixQ

This sounds like such a cool opportunity for Underwood’s fans! We’re sure she’ll have thousands of people sending in videos in the hopes they’ll get to take on Ludacris’ role in the song.

We already know of one Underwood fan that can perform “The Champion” quite well. Her name is Savannah, and she went viral after her father filmed her passionate ASL rendition of the song and shared it online.

Underwood eventually discovered the clip, and praised the young girl for her performance. Be sure to watch it in the video below!